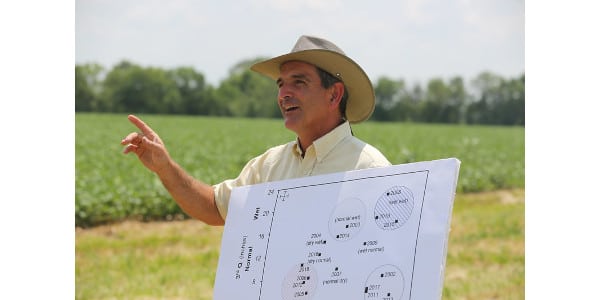 Nearly two-thirds of the site-years evaluated in the study saw an increase in yield compared to free drainage, with an overall average yield increase of 19 bushels per acre. The study looked at data from seven sites in the Midwest. These included silt loam fields in Shelby and Knox counties in Missouri, which are part of MU’s Lee Greenley Jr. Memorial Research Center, as well as two sites in Minnesota and three sites in Ohio.

Researchers found that drainage recycling systems reduced yield variability by 28% over 53 site-years of work. This increases the resilience of the crop system and improves food security, Nelson says.

A combination of drainage and subirrigation also protects the environment by keeping nutrients such as nitrogen and phosphorus from entering downstream waterways, he says. That nutrient-rich water is recycled through irrigation.

Closed-loop drainage control systems capture and store surface and subsurface drainage water in a reservoir and then reuse that water as supplemental irrigation. Water level control structures—boxes with slides or gates that are buried in the ground—are spaced through water management zones based on the field’s slope. Flow is adjusted to retain or drain water based on precipitation and the growth stage of the crop.

Researchers also found that corn yields gain most in the second half of vegetative development (9-leaf and greater) to early grain filling (blister stage). They found no yield difference between free drainage and drainage water recycling before the V9 stage or after R2.

Yields increased most in dry years when corn was most vulnerable to water stress and lower yields. Drainage water recycling likely improves corn yield in years when precipitation is below the critical threshold of 5 inches during the V9-R2 period and during extreme temperatures.

Because soil plays such an important role, Nelson recommends the Subirrigation Site Suitability Tool at transformingdrainage.org/tools/subirrigation-suitability-tool to help with initial planning.

The report was written by collaborators from MU, Minnesota Department of Agriculture, Purdue University, University of Wisconsin-Green Bay, USDA Agricultural Research Service (ARS) and the agricultural biotechnology company Benson Hill. Nelson, Lori Abendroth of the USDA-ARS in Columbia and doctoral student Rebecca Willison worked on the research for the publication.

Learn more about the Transforming Drainage project at www.transformingdrainage.org.