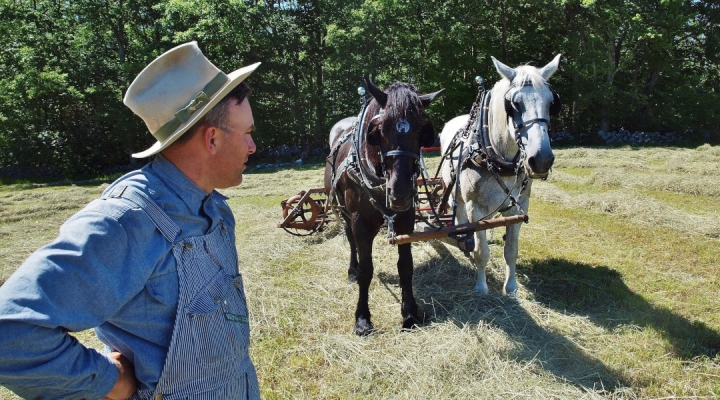 LOUDON, N.H. — The Draft Animal Power Network’s 2022 Field Days (DAPFD) will once again be held at Sanborn Mills Farm in Loudon, New Hampshire. Sanborn Mills Farm has a rich history which dates back to the Revolutionary Era. In preparation for the DAPFD on September 30th – October 2nd, take a look back at the history of the host site!

Sanborn Mills Farm’s beginnings trace back to the 1770s, when John Sanborn, a surveyor and Continental Army soldier, acquired water rights to the area of what is now called the Sanborn Brook. John’s son Edmund Sanborn later developed the farm into what is recognized today. He hired millwright Theodore Farnham Elliott to build a sawmill and gristmill, which still exist on the farm, in 1829-1830.

By the 1840s the farm was an important commercial center for the Loudon region offering lumber, grain milling, blacksmithing, and other services. Water provided power and the draft animals provided the strength for these services in the area. The farm’s importance to the area waned a bit in the 1860s as railroads made Manchester a center for textile milling, but the farm remained sustainable and operation of the mills, blacksmithing, and farming continued.

Edmund’s son James B. Sanborn inherited the property next and he and his wife, Mary Yeaw, built the main house on the property in 1875. Family lore says that Mary made a new, modern Victorian house a condition of her being willing to move to “rural” Loudon from Providence, R.I. Eventually James’ son, John B. Sanborn acquired the property and used animal-power farming techniques well into the 20th century and was one of the last “old time” farmers in the area. The farm remained in the Sanborn family for two more generations before it was purchased by Colin and Paula Cabot in 1996.

Today, Sanborn Mills Farm is a working farm that seeks to sustain and teach traditional farming and craft skills, and good stewardship of its agricultural landscape for social, environmental, and economic benefits. Sanborn Mills Farm features a saw mill and a grist mill both powered by water, and educational workshops that promote traditional crafts and skills, such as blacksmithing, draft-animal farming and logging, and fiber arts. The farm also features extensive gardens.

Stay tuned for more details on how to register. We look forward to seeing everyone at Sanborn Mills Farm on Sept. 30, Oct. 1 & 2, for our 2022 Draft Animal Power Field Days! For more information on the Draft Animal Power Network check out our website at www.draftanimalpower.org or emailing dapnetinfo@gmail.com. For more information on Sanborn Mills Farm check out their website at www.sanbornmills.org.