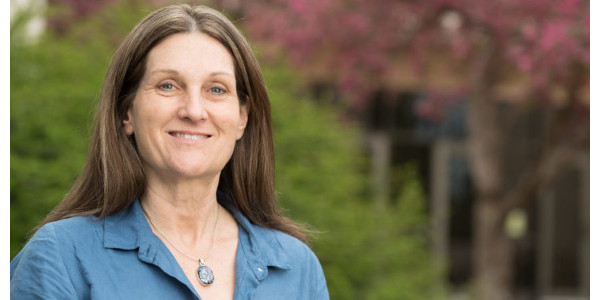 A veterinarian, teacher and researcher, Dr. VandeWoude has specialized in studying conditions affecting cats, both big and small. (Photo: William A. Cotton/CSU Photography)

FORT COLLINS, Colo. — Dr. Susan VandeWoude learned the news at Dulles Airport while returning from Washington, D.C., on April 30: She had been elected to join the National Academy of Sciences, one of the highest honors for scientists in recognition of distinguished and continuing achievements in original research.

VandeWoude, associate dean for research in the College of Veterinary Medicine and Biomedical Sciences, had attended an event in the nation’s capital where NAS members welcomed last year’s inductees, including Colorado State University Distinguished Professor Diana Wall. Vandewoude was traveling with another University Distinguished Professor and Academy member, Dr. Ed Hoover, who is her husband.

VandeWoude’s father, George, who was elected into the Academy in 1993, had also attended the NAS festivities.

“All day, I felt like I was hit by a great big wave,” VandeWoude said. “It was such an overwhelmingly strange feeling of shock and disbelief. I wasn’t giddy or excited. I was speechless, which isn’t typical for me.”

VandeWoude is the second female researcher from CSU to join the NAS, and the 12th faculty member elected to the reigning body of national thought leaders on all things scientific. (See list below.) She is also the only researcher from Colorado included among this year’s inductees.

Rick Miranda, provost and executive vice president at CSU, said the honor was “wonderful recognition for one of our most accomplished faculty leaders. Not only has she been a spectacular researcher and teacher, but she has also contributed significantly to the development of programs in her college and at the University. We are all delighted with this news.”

Women make up about 40% of this year’s new Academy members. Wall said that she was thrilled to have another female scientist from CSU join the ranks of the NAS. “Sue and I are only two representatives of the high quality of women scientists at the University,” she added.

Research is what fulfills her

A veterinarian, teacher and researcher, VandeWoude has specialized in studying conditions affecting cats, both big and small, including feline immunodeficiency virus, which can leave  animals vulnerable to other infections.

Her discoveries are linked to both animal and ecological concerns, and the findings shed light on the emergence and spread of viruses in the human population. VandeWoude’s research has been funded by the National Science Foundation, National Institutes of Health, and Morris Animal Foundation.

While a student at Virginia-Maryland Regional College of Veterinary Medicine, she spent her summers in the lab, working on projects at the NIH and Georgetown University.

During her senior year, she landed a clinical rotation at the NIH and explored laboratory animal medicine. VandeWoude said that she was drawn to the concept of animal welfare and guiding the use of animals in research in a thoughtful way.

She took a position at Waldorf Animal Hospital in Maryland after graduating from veterinary school, focusing on small animals. And while she enjoyed the problem-solving involved in running a clinic, VandeWoude had a strong desire to contribute to biomedical research.

After completing post-doctoral training in comparative medicine at Johns Hopkins Medicine — where she participated in research that identified the agent responsible for Borna disease, which causes encephalitis in ruminants and horses— she joined CSU in 1990.

VandeWoude has worked in a variety of roles, including clinical, administrative, teaching and research activities. She served as director of Laboratory Animal Resources from 2007-11.

Shortly after arriving at CSU, VandeWoude started exploring how the viruses of non-domestic or wild cats relate to the ones in domestic cats. She studied how one viral infection impacts subsequent exposures to other viruses.

“If a domestic cat is exposed to a virus originating in a puma, it’s more resistant to domestic cat immunodeficiency viruses,” she explained. How these viruses interact informs vaccine development or other therapies that may protect the animal from clinical disease.

Over the last 15 years, VandeWoude and her interdisciplinary team of scientists at both CSU and other institutions have been exploring the ecology of viruses in natural hosts.

“We’ve been looking at how viruses in domestic cats, bobcats and pumas are transmitted between animals,” she explained. “Our research has found that pumas — also known as mountain lions or cougars — because they’re the top predator, prey on bobcats and domestic cats. They are then exposed to viruses, including feline immunodeficiency virus and feline leukemia virus, which may have significant disease impacts.”

Until recently, VandeWoude said she thought she got her drive from her father, because he was also a scientist.

“But as I got older, I realized I have a lot of my mother’s fortitude and approach to being very practical,” she said. “She always got everything done in the household and took care of everybody.”

VandeWoude grew up on a farm in Virginia, where the family relocated when her father landed A job at the National Cancer Institute in Washington. They had been living in a rural part of Long Island, New York, and  VandeWoude and her three sisters weren’t thrilled about moving to a city. The farm was a compromise, as all of the kids were excited about raising animals.

The girls joined 4-H, raised chickens, pigs, ducks and beef cattle and, along with their mother, learned how to do and make everything from scratch. Her mother was certified to perform artificial insemination on cattle, which was ground-breaking at the time.

VandeWoude pursued her undergraduate degree in chemistry at the California Institute of Technology. There, she joined “very smart kids doing science and engineering.” Her nickname at Caltech was “farm girl,” she recalled, with a smile. As graduation approached, she applied to graduate schools as well as veterinary and medical schools.

She opted to continue her academic career in veterinary medicine, which she felt fit best with her personality.

“Being a veterinarian seemed like it had a lot of career options,” she said. “I thought that I was probably destined for research and could see that a veterinary education would give me a very broad comparative background.”

As a teacher for students in the Doctor of Veterinary Medicine program at CSU, VandeWoude also enjoys educating students about what they can contribute to the research enterprise.

“Because I run my own lab, I have a great window into what is helpful in facilitating research,” she explained. “My role as associate dean for research, the way I’ve interpreted it, is to help people get their work done and persuade the powers that be to help with processes and funding opportunities.”

VandeWoude has supported programs that help with D.V.M student research training and supports the University’s world-class D.V.M./Ph.D. program. She interacts frequently with the Office of the Vice President for Research, and works with associate deans in other colleges to develop integrated programs.

“What drives me to do so many things is that they’re very fulfilling to me,” she said. “I still don’t know what I’m going to do when I grow up.”