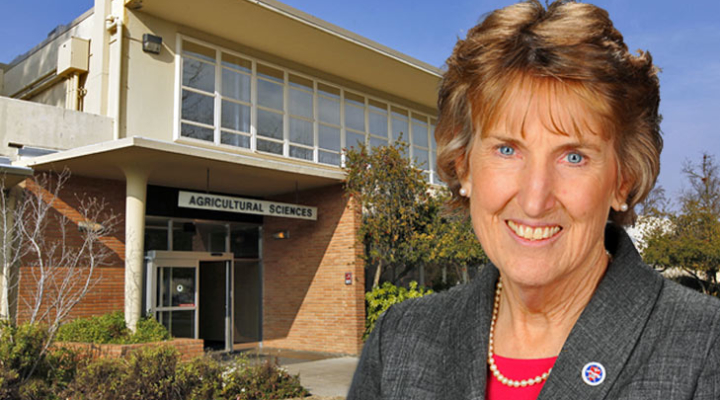 FRESNO, Calif. — Dr. Sandra Witte, the dean of the Jordan College of Agricultural Sciences and Technology at Fresno State who is credited with increasing industry partnerships with the University, announced her retirement, effective July 1.

Witte served the University for 38 years in various capacities. She was named the Jordan College dean in March 2016 after assuming the role of interim dean in December 2014.

Since then, new community and industry partnerships have enhanced scholarships, internships, career placement, advisory boards, research support and student recruitment. Students, staff and faculty have also benefitted from key renovations to the food science and nutrition laboratory and mechanized agriculture laboratory among other facility enhancements.

“Under Dean Witte’s steady leadership, the Jordan College of Agricultural Sciences and Technology has risen in academic stature and dramatically increased the number of partnerships with the agricultural industry,” said University President Joseph I. Castro. “The Jordan College is poised for even more growth and new heights of success in the years to come.”

Witte oversaw the 1,000-acre University Agricultural Laboratory, including the hiring of its current farm manager, Gibson Farm Market manager and winemaker. They are among the staff who manage 22 campus farm enterprises that employ student workers and are used for classes, research and public tours.

“It’s been an honor to serve the students, faculty and staff of the Jordan College and the University,” Witte said. “All of our lives depend on agriculture, and being a part of the development of future ag leaders has been wonderful.”

She previously held roles in the college as associate dean, dietetic program director and food science and nutrition faculty member and department chair since she started on campus in in 1981. She also previously served in leadership roles as the executive director of Fresno State Programs for Children from 2012 to 2018 and as the interim dean of the Division of Graduate Studies from 2013 to 2014.

Dennis Nef, the University’s vice provost, has accepted a two-year appointment as the new Jordan College dean starting July 1. With 35 years of service at Fresno State, Nef has been vice provost since July 2014 after serving as associate vice president since 2011 and as dean of undergraduate studies since 2003. He also served as the interim provost for five months in 2009.

During the prior 20 years, he served as the Jordan College’s acting dean for one year from 1997 to 1998, and eight years as its associate dean from 1995 to 2003. He also served five years as the agricultural economics department chair and became a faculty member in 1982. His areas of teaching and research expertise included agricultural policy and land, natural resource, trade and water economics.

He has co-chaired the President’s Commission on the Future of Agriculture that released a report in 2014 outlining new academic and outreach opportunities to better connect the college and University with the nation’s leading agricultural area.