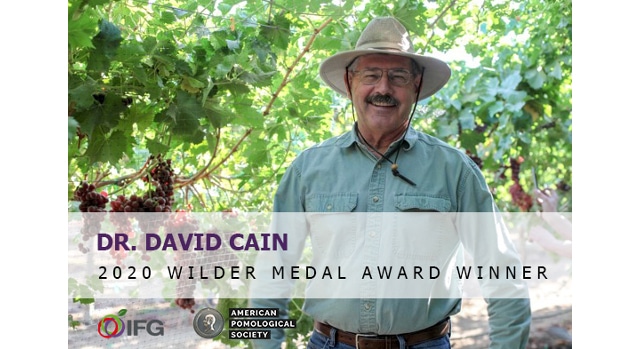 As one of the most forward-thinking fruit breeders in modern times, Dr. Cain has developed or co-developed 94 cultivars of fruits, including 66 table grapes, 10 sweet cherries, nine plums, four apricots, four peaches and one nectarine cultivar. (Courtesy Photo)

BAKERSFIELD, Calif. — International Fruit Genetics (IFG) is excited to announce that its Founder and Chief Plant Breeder, Dr. David Cain, has been awarded the 2020 Wilder Medal, the highest honor presented by the American Pomological Society. This medal recognizes Dr. Cain’s contributions throughout his 42-year career in fruit breeding.

As one of the most forward-thinking fruit breeders in modern times, Dr. Cain has developed or co-developed 94 cultivars of fruits, including 66 table grapes, 10 sweet cherries, nine plums, four apricots, four peaches and one nectarine cultivar. His developments have had an impact worldwide, being grown on all continents except Antarctica. These developments have resulted in an impressive 75+ U.S. plant patents, over 20 additional U.S. plant patents applied for, and more than 200 Plant Breeders Rights applications in the world.

“This award is substantial recognition for all that Dr. Cain has accomplished and contributed to the industry over his career,” said Andy Higgins, CEO of IFG. “His vision and impact have changed the table grape industry. We are excited he has received such an esteemed and significant award for his work.”

Dr. Cain founded International Fruit Genetics (IFG) in 2000 to fulfill a long-term personal goal to carry out many of his ideas and dreams in fruit cultivar improvement. This private breeding endeavor in Bakersfield/Delano, Calif. started with only a limited germplasm of base, primarily of publicly released cultivars. His familiarity with public varieties of table grapes and their potential as parents provided a major benefit to the IFG program. Additionally, he reviewed germplasm holdings in table grapes at the USDA National Germplasm Repository in Davis, Calif., and chose selected parents for breeding from this collection. One of his more insightful approaches was to consider broadening the germplasm base further in the foundation-building of the IFG program. Dr. Cain’s collaboration with an exclusive arrangement with the University of Arkansas for IFG, has provided material to develop revolutionary fruit varieties, elongated shapes and large berry sizes. These traits as well as genetic germplasm broadened the IFG program and proved to be very important in the developments of Dr. Cain’s new varieties.

In 2009, he released his first IFG table grape that resulted in U.S. plant patents for the trademarked Sweet Surrender™ and Sweet Sunshine™ followed by Sweet Celebration™ in 2011. These were V. vinifera cultivars with traditional traits characteristic of California table grapes with neutral flavors, but with enhancements in quality and yield. His unique Cotton Candy™ and Funny Fingers™ cultivars followed, having unique flavor and shape, respectively. After these table grape cultivars, 43 additional U.S. plant patents have been applied for or issued. The new varieties have been planted around the world and are making tremendous impacts in both the U.S. and global table grape production regions. As of early 2020, production areas of Dr. Cain’s varieties and some of the most important IFG table grapes span over 60,000 acres globally, including over 19,000 acres of Sweet Globe™ and nearly 5,000 acres of Cotton Candy™.The unique flavor profiles of Cotton Candy™, Candy Snaps™, Candy Hearts™ and other flavored cultivars are making major impacts on table grape markets and increasing customer excitement for table grapes around the world.

Sweet cherry improvement was another priority in the IFG program, particularly to develop cultivars for diverse environments including low-chill locations. Dr. Cain’s focus and research in this area resulted in 10 cultivars thus far, including Cheery Grand™, Cheery Burst™ and Cheery Crunch™. The IFG cultivars are being expanded in production in the U.S., Australia, South Africa, Chile and the EU as well as other world locations.

Prior to founding IFG, Dr. Cain had diversified his breeding efforts across a range of crops including table grapes as well as plums, apricots, peaches and nectarines. Many of the 36 cultivars he developed have had major impacts commercially, particularly the table grapes. Four of his other most popular cultivars included Scarlotta®, Midnight Beauty®, Adora® and Sable®, which he developed while with another breeding company, SunWorld. These cultivars continue to be successful, producing more than 100 million kilograms (more than 237 million pounds) in the U.S., Chile, Peru and South Africa during the 2018-19 production season.

In addition, Dr. Cain served as associate professor at Clemson University for six years, where he had a 90 percent research and 10 percent teaching appointment with a focus on Prunus breeding and genetics. In this role, he expanded the scope of the scion breeding program, developed embryo rescue activities for early season peach improvement, and initiated a cooperative rootstock breeding program. His work resulted in two new peach cultivars and one peach rootstock (released after his departure from Clemson). The rootstock, Guardian™, has become one of the most important peach rootstocks in the Eastern U.S. In addition to research, he instructed graduate and undergraduate seminars and advised three MS students to completion.

After completing his Ph.D., Dr. Cain served as a research scientist with USDA-ARS in Fresno, Calif. In this position, he was responsible for breeding seedless raisin and table grapes, as well as grape rootstocks. He also developed the first successful method to culture seedless grape ovules, leading to the widespread use of seedless x seedless hybridizations in table grape breeding. This significant innovation has facilitated much improved efficiency in breeding seedless table grapes for the last 40 years.

Although Dr. Cain spent most of his professional career in industry, during his time working in the public sector he left his mark in academia. He has had 50 research publications in his career, including 17 refereed articles. He also attained significant extramural funding to support his research at Clemson and USDA-ARS. He has served on numerous institutional committees, including the ASHS Fruit Breeding Working Group and the American Pomological Society Advisory Committee, and is currently a member of six professional societies including the American Pomological Society and American Society for Horticultural Science.

Dr. Cain received the 1981 Stark Award from the American Society for Horticultural Science given in recognition of outstanding contributions to the improvement of fruit trees.

International Fruit Genetics (IFG), headquartered in Bakersfield, Calif., and founded in 2001, is one of the world’s largest premium fruit-breeding companies. Its breeders, Drs. David Cain and Chris Owens develop new varieties of table grapes and cherries, which are patented and licensed to worldwide marketers and growers. IFG currently has licensees in 15 countries and its fruit is actively marketed in over 25 countries. For more information, visit www.ifg.world.

ABOUT THE WILDER MEDAL

Established by the American Pomological Society in 1873, the Wilder Medal is conferred on individuals or organizations which have rendered outstanding service to horticulture in the broad area of pomology. Special consideration is given to work relating to the origination and introduction of meritorious. The medal was established in honor of Marshall Pinckney Wilder, the illustrious founder and first President of the Society.

Preparing for apple harvest in the Grand Rapids area
August 3, 2021