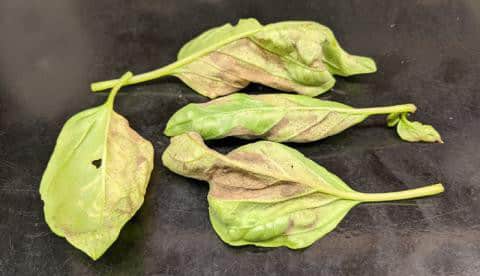 Clumps of spores of the basil downy mildew pathogen give the leaf the characteristic dirty, fuzzy appearance. (University of Illinois Plant Clinic)

URBANA, Ill. — The presence of basil downy mildew in northeast and east-central Illinois is raising concern for commercial and home growers as temperatures begin to cool.

“Illinois has become one of the leading basil producers in the country,” says Travis E. Cleveland, University of Illinois Extension crop science specialist. “With 600 acres in production, valued between $10,000 and $20,000 per acre, there’s a lot at stake.”

Basil downy mildew disease symptoms first appear as yellow areas on the tops of leaves. The undersides of leaves are covered with spores and dirt. Under magnification, the leaves appear to be covered in grey fuzz.

Basil downy mildew is caused by Peronospora belbahri, a fungal-like oomycete. The spores travel large distances by wind, and a few spores can quickly lead to a huge infestation.

The mildew flourishes in cooler, wet weather, making it more of a concern at the beginning and end of the growing season, Cleveland says. The disease progresses quickly, with affected leaves turning brown and falling from the plant. A plant can defoliate in a few days.

“Because this pathogen is known to develop resistance to fungicides quickly, chemicals with different modes of action should be used,” Cleveland says.

For commercial producers, there are a few chemical fungicides that are effective, but require a pesticide applicator license and may need up to 17 applications per season.

The non-selective fungicide Chlorothalonil has shown to be somewhat effective and is available under numerous trade names to home gardeners.

“To treat an infestation, quickly remove and destroy any diseased plants,” Cleveland says. “Because the pathogen needs moisture to thrive, reducing humidity and leaf wetness is important.”

Increase planting distances, planting in areas of full sun and air movement, and watering at the base of the plant helps reduce moisture on or around the plant.

Several basil cultivars resistant to downy mildew have been recently released; however, even resistant basils can be infected in moist conditions.

Basil downy mildew is less virulent toward red or purple basil, which can be used as an alternative to the popular sweet basil, Babadoost says. Carefully inspect purchased plants at the nursery or garden store before bringing them home.

Hold off on fall fertilizer until soils cool
October 7, 2021