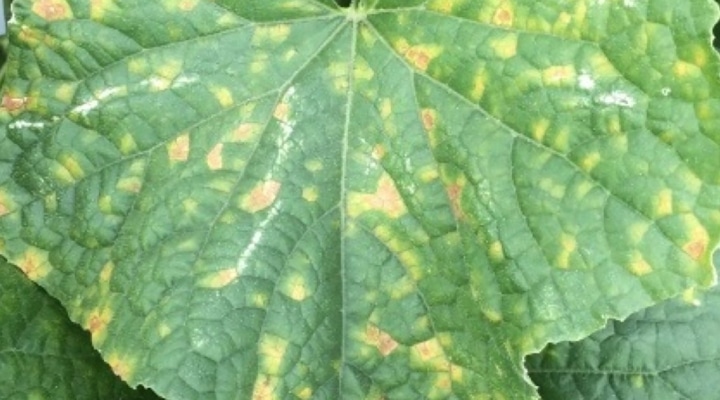 Downy mildew is a water mold that destroys plant foliage and is common on cucurbits, a family of plants that includes cucumbers, various melons, squashes and gourds. It makes annual unwelcome visits to South Carolina in late May or early June. The first sighting for 2022 was in Bamberg County on May 25. (photo by Clemson University)

CLEMSON, S.C. — Now is the time for growers to come to the aid of their cucurbits and rise against downy mildew.

Downy mildew is a water mold that destroys plant foliage and is common on cucurbits, a family of plants that includes cucumbers, various melons, squashes and gourds. It makes annual unwelcome visits to South Carolina in late May or early June. The first sighting for 2022 was in Bamberg County on May 25.

Rob Last, Clemson Cooperative Extension Service horticultural agent, said cucumbers and cantaloupes are currently most at risk to downy mildew. However, all cucurbits are susceptible. The strain affecting squash and watermelons had not moved out of Florida as of May 26.

Downy mildew is caused by the oomycete Pseudoperonospora cubensis mold. It does not overwinter in South Carolina but spreads from more southern states via wind-blown spores and can travel up to 1,000 miles in two days.

Cucurbit downy mildew also can be spread through infected transplants. The disease begins as dark, irregular spots that spread quickly on plants’ leaves, causing them to curl and ultimately leading to a reduction in photosynthesis that can interfere with the development of fruit.

For cucumbers, Clemson Extension horticulturists suggest one application of Orondis per crop. If other fungicides are used, Last advises growers to make applications seven days apart.

“A stretch longer than seven days is likely to increase the potential for disease spread,” he said.

In addition to Orondis, other products suggested for use in cucumbers include: Omega ( Fluazinam 7 day PHI in Cucumbers), Bravo (chlorothalonil), Ranman (Cyazofamid), Presidio (fluopicolide), Orondis Opti (Oxathiapiprolin and clorothalonil never use Orondis Ultra in cucumbers), Elumen (Ethaboxam) and Gavel (Zoxamide and Mancozeb).

The Cucurbit Downy Mildew Forecast map can be used to determine where downy mildew has been reported. The site also predicts where spores will spread from known sources and where weather will be favorable for a new outbreak in the next 48-72 hours.

The study conducted by Tony Keinath, professor of plant pathology, and Research and Extension vegetable pathologist at Clemson’s Coastal Research and Education Center (REC) in Charleston, and Felipe Silva, assistant professor of agricultural economics in Clemson’s Department of Agricultural Sciences agribusiness program, shows downy mildew issues practically can be avoided by planting cucumbers early so that crops mature before downy mildew can take over. This saves growers money normally spent on fungicides and labor.

During the study, Keinath planted a spring crop of slicing cucumbers in 20 plots of 3 rows each at the Coastal REC in Charleston, South Carolina between March 20 and May 10. Results show it is important growers plant cucumbers nearer the beginning of the planting period before temperatures get warm.

Downy mildew outbreaks most often occur during mild, wet weather, when rainwater washes spores out of the air onto leaves. After infecting a plant, downy mildew will continue to spread, even in dry weather, if temperatures stay above 60°.

Early planting can be beneficial for both conventional growers and organic growers. In addition to helping avoid downy mildew, the researchers found planting early also can result in higher yields.

For questions about cucurbits or other crops, contact the local Clemson Extension office.