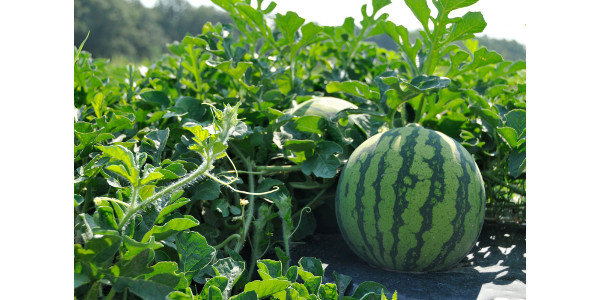 Downy mildew is a water mold that destroys plant foliage. It begins as dark, irregular spots that spread quickly on watermelon plants’ leaves, causing them to curl. It was found in a commercial watermelon crop in Charleston County Monday, a few days after Tropical Storm Cindy hit the East Coast.

“Downy mildew had been reported on watermelons in Alabama and Georgia,” Keinath said. “When Tropical Storm Cindy went through those two states, it picked up downy mildew spores, carried them and dropped the spores on South Carolina watermelons.”

Downy mildew is common on cucurbits, a family of plants that includes various melons, squashes and gourds. Keinath encourages growers to spray with fungicides effective against downy mildew beginning now until harvest is over, as late as September for some areas of South Carolina. The three recommended fungicides are Ranman, Orondis Opti and Omega. Omega can be used on watermelon and cantaloupe, but not on other cucurbits, he said.

The best fungicides are Ranman and Orondis Opti. Keinath advises using a 2-way rotation, with Ranman sprayed the first week and Orondis sprayed the second week. No downy mildew fungicide needs to be sprayed in the third week, he said.

“Reports from other states indicate that Orondis Opti is effective enough to last 14 days after application,” Keinath said. “Although Ranman is relatively inexpensive, it is being used very widely throughout the southern United States, which increases the risk of fungicide resistance to this product. I caution growers about relying too heavily on Ranman.”

Keinath said it is important growers remember these three fungicides are effective only against cucurbit downy mildew. With the more frequent rains that have started, growers also need to spray watermelons and cantaloupes for gummy stem blight with fungicides, such as Inspire Super, Switch, Luna Experience or Aprovia Top. For more information, refer to the Clemson Extension Watermelon Spray Guide for 2017.

Watermelons are a valuable crop in South Carolina. Each year, growers in the state harvest around 7,300 acres of watermelons valued at around $27.6 million, according to the United States Department of Agriculture National Agricultural Statistics Service.

Keinath is a professor of plant pathology at Clemson’s Coastal Research and Education Center in Charleston.