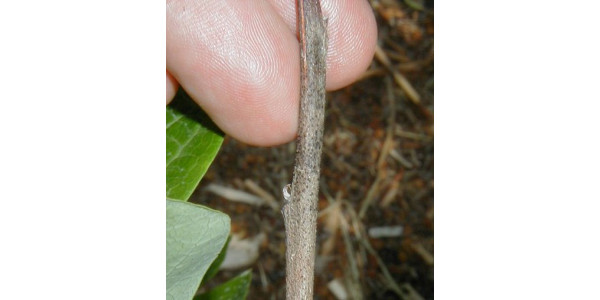 Black spots on this blueberry shoot killed by phomopsis are the pycnidia, which release spores during spring rains. (Photo by Mark Longstorth, MSU Extension)

EAST LANSING, Mich. — Southwest Michigan has had a relatively mild winter. This allows cane blight pathogens such as phomopsis (Phomopsis vaccinii) and anthracnose (Colletotrichum acutatum) to survive on old, dead tissues. Spores from these overwintering lesions can infect new growth in spring.

Phomopsis overwinters in dead shoots previously killed by phomopsis (Photo 1). Anthracnose overwinters on old fruit trusses and bud tissue (Photo 2). Dormant sprays offer a chance to clean up this overwintering inoculum and reduce disease pressure at the start of the year.

Dormant sprays have a long history in fruit production. They are applied while the plants are dormant, prior to green tip or bud break. Dormant oils are used primarily to suffocating overwintering insects and insect eggs.

Lime sulfur and Bordeaux mixture were some of the first fungicides used in fruit production. Prior to synthetic pesticides, these sprays were considered a critical part of cleaning plant material prior to the growing season, but after pruning. This is still critical for organic blueberry growers in Michigan.

Lime sulfur is a mixture of calcium polysulfides formed by boiling slaked lime with sulfur. It is corrosive and unpleasant to work with. Many blueberry growers have been using Sulforix—a more penetrating form of lime sulfur—or copper (e.g., Cuprofix or Magna-Bon) for controlling phomopsis twig blight and other canker diseases. Lime sulfur breaks down after application, releasing sulfur and burning exposed fungal tissues and spores.

Michigan trials with lime sulfur reduced phomopsis twig blight by about half with a dormant lime sulfur application. Two applications, one in fall and one in spring, tended to be slightly better than a single application in either fall or spring. Similar reductions were seen in anthracnose fruit rot and botrytis fruit rot at harvest due to dormant sprays.

When applying these sprays for the first time, follow all the label directions. It may be wise to treat a smaller area or use lesser rates until you feel confident avoiding any phytotoxicity issues.