Home / Colorado / Don’t move firewood; It bugs me!
A new user experience is coming! We'll be asking you to login to your Morning Ag Clips account March 1st to access these new features.
We can't wait to share them with you! Read more here. 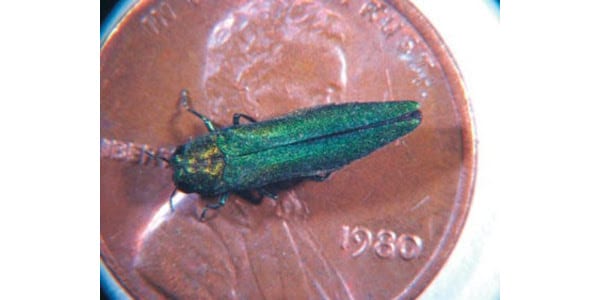 GUNNISON, Colo. — I have a bumper sticker on my truck that says, “Don’t move firewood, it bugs me.” I really don’t know if those who read it understand what is trying to be said, but if you care about our natural and urban forests, it may be wise to take an interest in the meaning behind the slogan.

So, what do I mean by not moving firewood and why would moving firewood bug me in the first place? Let me give you a hint. Did you know that an insect introduced into the United States from Asia has caused the death of an estimated twenty million Ash trees, five million of which are in the Southeast corner in the State of Michigan? This same pest has shown up in other states (Ohio, Illinois, Indiana, Pennsylvania, Maryland and Virginia) via firewood and other means.

The culprit responsible for all this damage is the Emerald Ash Borer (Agrilus planipennis). It is less than the size of a penny, and has a green metallic look.

The Emerald Ash Borer (EAB) is a wood-boring beetle native to China and eastern Asia. It is likely that it came to the United States via some form of wood packaging materials. No matter how it got into the United States, it’s here. It is up to us to do our part in helping to prevent the spread of this little critter.

This brings us right back to the bumper sticker. If the EAB is going to get into Colorado one of the ways it is likely to come is via firewood. I once heard a lecture from Dr. Whitney Cranshaw of Colorado State University who said, “The Great Plains acts as a natural barrier against the Emerald Ash Borer.” So the most likely way that the EAB will get here is if people bring it with them.

Colorado is a popular vacation and recreation site. People come to hunt, fish, camp, and enjoy other outdoor activities and when they do, some people bring their own firewood. If they are from any of the infected/quarantine areas, the wood they bring may also bring the Emerald Ash Borer. It is critical for us to be informed and to inform those whom we know that visit Colorado not to pack firewood and haul it to Colorado. It is best to leave their firewood at home and when they get here buy wood locally. One reason for bringing in their own firewood is to save expenses. Let’s admit that it is probably less expensive to bring your firewood in and not buy wood locally, but at what cost?

Before I come to the end of this article, let me make one last observation. Although this article has focused on the Emerald Ash Borer as a potential threat, the EAB is by no means the only pest that needs to be considered when it comes to moving firewood. There are other bugs and other diseases out there that are not native to our State or County. These things too could be just as threatening to our ecosystem. It is also important to realize, in this new global economy, that there will be new potential threats to our environment. There will always be the possibility of new and exotic pests arriving to create new problems for us to deal with. Not moving firewood may seem a bit trivial or unnecessary, but to save our Ash trees and other trees, it is important that we be proactive in our stewardship.

There is an Ash tree in Hotchkiss that I visited once a few years ago and I was impressed with its size and beauty. The first time I walked over to it I tried to put my arms around the trunk. The best I could do was to get my arms about half way around. It would be a shame to see this majestic wonder of life die because someone was careless or indifferent in moving firewood.

Don’t move firewood. It bugs me!