Home » Don't like your greens? Blame it on Brassica domestication 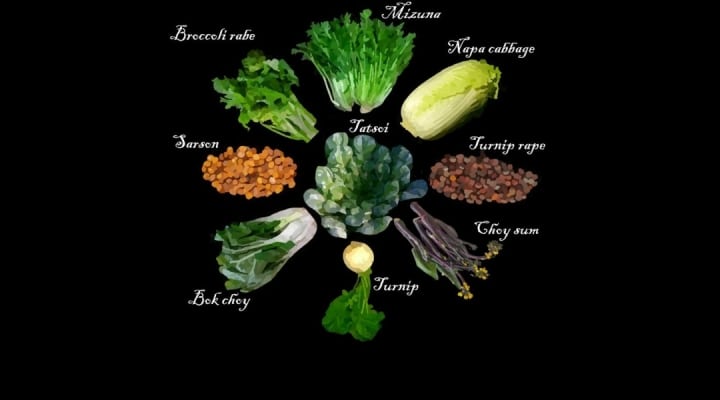 Nine examples of domesticated Brassica rapa, a single species that humans have bred into root vegetables like turnips, leafy greens like bok choy and oil seeds. (Illustration by Alex McAlvay)

WASHINGTON — Delicious to some, but a bitter bane to others’ taste buds, vegetables like broccoli rabe, bok choy and turnips are a dinner staple —and picky eater conflict — around the world.

It all likely started in the mountains near present-day Afghanistan, where humans first domesticated turnips 3,500 to 6,000 years ago, according to a new study recently published in the journal Molecular Biology and Evolution. University of Wisconsin-Madison Professor of Botany Eve Emshwiller and her former graduate student Alex McAlvay (now an assistant curator assistant curator of economic botany at The New York Botanical Garden) led the research.

To identify the genetic root of it all, the research team reconstructed an evolutionary tree from a comparative DNA sequences analysis of more than 400 different varieties of the species Brassica rapa from around the world.

Just as varieties of ancient corn look very different than the hybrid crops of today’s farms, Brassica revealed a similar past.

From this tree, they discovered that Central Asian turnips were the most genetically diverse crops. That in turn suggested that humans in the region may have valued most the fatter, starch-rich taproots that became turnips several thousand years ago, as agriculture took root around the world.

The research team identified both the Hindu Kush mountains as the epicenter of domestication, and weeds from the Caucasus region as among the most likely wild relatives of the species’ vegetable crops. Turnips then spread west to Europe and east to East Asia, where farmers later selected for larger leaves. These leafy versions became bok choy, napa cabbage and broccoli rabe, among other vegetables found in today’s grocery stores.

Interestingly, ancient cultures also pointed to evidence that matched the genetic analysis. Ancient literary references to turnips in the region, and the apparent existence of the word for “turnip” in the ancestor of languages from the region, also supported the turnip as the original domesticated form.

“It’s important to know where your crops are from,” said McAlvay. “In this work, we had a broader data set than had been used previously. And we also had more wild collections than had been used previously. Having enough of those non-cultivated forms allowed us to distinguish between those feral or escaped weeds and the ones that are likely truly wild.”

Before the study, it remained unclear if turnips or oilseeds were the first tamed varieties.

This confusion has stemmed from the ubiquity of Brassica rapa and its many weedy forms, which could be truly wild or merely escaped crops turned feral. While wild and feral forms look similar, their genetic histories are vastly different.

“That parallel selection for leafy forms is interesting and gives us an evolutionary system to compare how this leafiness trait can arise,” said McAlvay. Other farmers selected other lineages for their oil-rich seeds.

The true identities of these wild relatives — which have been hidden for years because of the tangled web of family relationships in the species — also provides valuable information to evolutionary biologists and crop breeders alike.

“We might want this information in order to conserve those wild relatives, so they don’t disappear in the course of habitats being lost,” said Emshwiller. Wild plants can confer valuable traits when crossed with crops, which typically lose their hardiness during domestication.

“And domestication is a good way to study evolution in general,” Emshwiller adds. “If we understand how crops evolved under human influence, that can help us extrapolate to how wild plants might evolve under different kinds of selection.”

For their next steps, the researchers want to include more weedy samples mainly from the original site of domestication, the Hindu Kush region. The region should be host to many different wild versions of Brassica rapa.

The study may also provide important information for this worldwide important crop and preserve important genetic resources to make brassica varieties more resilient as climate change and new pests may threaten some crops in the future.