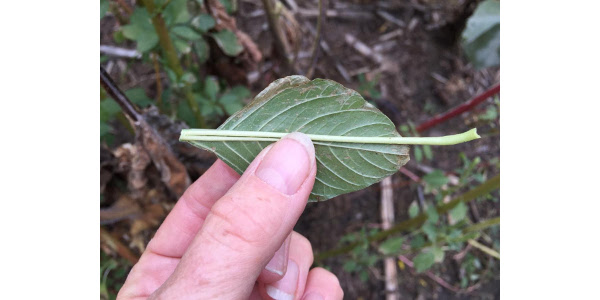 Long Petiole Length: Palmer amaranth is the only species of pigweed whose petiole is longer than the leaf blade. This photo shows the petiole folded back over the leaf, depicting its length as compared to the leaf blade. (Photo courtesy of Ruth Beck)

If there’s one message Dan Forgey hopes to convey to South Dakota farmers and ranchers, it is the fact that this aggressive weed could take up residence in their fields in 2020 if they don’t take the threat seriously.

Forgey speaks from experience. In 2018, the weed was discovered on Cronin Farms, in an 80-acre field of white wonder foxtail millet. The Palmer amaranth found its way into the field, stowed away in the millet seed.

Its discovery voided the $42,500 seed contract. Forgey and his employer opted to hay the millet and burn the bales at a cost of $3,500. “It’s our belief on this farm, that we won’t give someone else our problem,” Forgey explains.

What makes this weed so bad? Its competitive nature. “It can outgrow row crops if given the right environment,” says Gared Shaffer, SDSU Extension Weeds Field Specialist.

Carrying up to 1 million seeds per plant, if conditions are right, Palmer amaranth can emerge within five days, growing to heights of 10 feet, with a stalk 4-inches in diameter. “It gets as tall as a Christmas tree and spreads like wildfire,” Forgey says.

Our climate no longer protects us from this weed. Originally found in southern states, over time, Palmer amaranth has been introduced to northern climates. It has been found in North Dakota, Wisconsin and Minnesota.

Like many weeds these days, Palmer amaranth can also be resistant to many herbicides including glyphosate.

Palmer is in many S.D. counties

Within the last five years Palmer amaranth went from being positively identified in one South Dakota county to, by the end of 2019, the weed had been found in 11 counties, mainly along the Missouri River.

Due to the number of prevent plant acres, if proper control measures were not employed, Schaffer says the number of Palmer sightings could increase in 2020.

Lowry farmers, Jeff and Dixie Beitelspacher agree. In 2019, they found Palmer amaranth growing in two prevent plant fields of millet. After the discovery, they were determined to find its source and eliminate the risk of spread.

The third-generation farmers walked their fields, hand rogueing Palmer. They spent many hours tracking down the source, eventually learning the seed originated in Kansas.

“This is a serious thing,” says Dixie, noting that in 2020 they plan on spending hundreds on additional herbicide to clean up the fields.

Although the seed grower offered to buy the bales of Palmer-infested millet, Beitelspacher’s would have had to sign a release agreement, releasing the grower, dealer and company from any liability. They would be expected to keep everything confidential. “We gave up the $23,000 and burned the bales because we didn’t want to sell the hay as feed and infect someone else’s land,” Jeff explains.

“And we feel it is important to get the word out,” Dixie adds. “We want to tell our story so that this won’t happen to others.”

So, what can South Dakota farmers and ranchers do to protect their acres from Palmer amaranth?

Although Palmer amaranth is new to South Dakota, Shaffer reminds producers, that for the most part, tactics for prevention are not.

“The only difference with Palmer amaranth is that in some crops it is emerging later than the other weeds we typically spray for. If you don’t use a post applied herbicide in June, you may not catch it in some cases,” Shaffer explains.

Ask before you buy: Before purchasing seed, ask where the seed originates to ensure it is not grown in areas infested with Palmer amaranth. Ask if the seed company tests for Palmer amaranth seed.

No tolerance for Palmer amaranth is allowed in seed lots because the weed is on South Dakota’s prohibited noxious weed seed list. However, it is important to understand the testing process the seed company utilizes. “Not all seed tests are the same,” Turnipseed explains.

“The rules only require seed companies to have a 50-gram sample tested in foxtail millet. If three Palmer amaranth seeds were found in a 500-gram sample, what are the chances they would have been detected in a 50-gram sample?” The Association of Official Seed Analysts (AOSA) Rules for Testing Seeds has minimum sample sizes to be analyzed in a noxious weed seed exam by crop species. The maximum sample size required by the rules is 500 grams (454 grams = 1 lb.). For smaller sized seeds, the minimum noxious weight is based on the weight of 25,000 pure seed. Wheat for example has a 500 gram sample size, alfalfa is 50 grams, Kentucky bluegrass is 10 grams, etc.

To learn about sample size and testing procedures, in addition to reading the standard seed label, he encourages producers to ask to see the seed testing documentation. Read the fine print to ensure the testing lab follows Association of Official Seed Analysts Rules for Testing Seeds.

If everything checks out on paper, for added accountability, Turnipseed suggests producers ask their seed salesperson (or do it themselves) to probe a 1-to-2-pound sample from bags they purchase. Place it in a freezer bag. Seal it with duct tape and have the seed representative initial it before it’s placed in the freezer. This way, if Palmer amaranth turns up in their fields, they will at least have a representative sample for re-examination of contamination.

ID: Proper identification is an important component of managing this weed. Palmer amaranth is from the pigweed family and therefore can be mistaken for waterhemp, redroot pigweed, and other common pigweeds that occur in South Dakota.

Leaf shape: This can vary within species. However, typically, the leaf shape of Palmer amaranth is wider, ovate or diamond shaped. Waterhemp leaves are generally longer, linear, or lanceolate in shape.

Long Petiole Length: Palmer amaranth is the only species of pigweed whose petiole is longer than the leaf blade. This characteristic becomes more noticeable as the plant matures and the petiole continues to grow.

Scout: Scout fields throughout the growing season for weed emergence before and after herbicide application. If a plant is found, it is best to dig it out by hand and bag it. Burn the plant to prevent seed from spreading.

Crop rotation: Add a small grain cash or forage crop such as oats, wheat, or rye to your cropping rotation.

Don’t ignore this threat: Shaffer reiterates Forgey and the Beitelspachers’ concerns. “If we don’t take the threat of Palmer amaranth seriously, it could turn into an issue and become the next water hemp.”

Where can I go for more information? To learn more, review a helpful new pamphlet developed by SDSU Extension and recently released. The pamphlet can be viewed at  https://extension.sdstate.edu/identification-and-management-palmer-amaranth-south-dakota.

In addition to the SDSU pamphlet, there are many more science-based, unbiased resources available including:

University of Illinois: Guidelines for the Identification and Management of Palmer amaranth in Illinois Agronomic Crops http://bulletin.ipm.illinois.edu/?p=1689