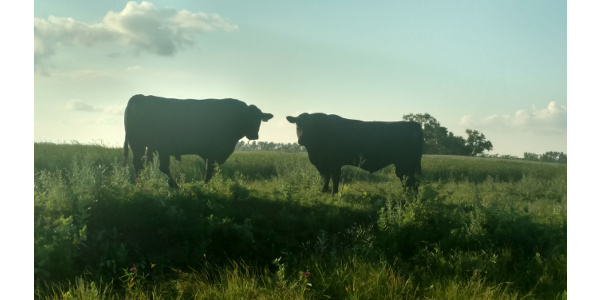 Bulls that are hurt or have other health issues can result in cows that are bred late or unbred. (NDSU photo)

FARGO, N.D. — Producers are busy with haying and the small-grain harvest this time of year, but they shouldn’t overlook the bulls, according to North Dakota State University Extension livestock specialists.

“It’s a wise choice to check the bulls often during the early part of the breeding season,” says Karl Hoppe, Extension livestock systems specialist at NDSU’s Carrington Research Extension Center. “Problems can arise that need quick attention or cows won’t get bred as timely as you want.”

For ranchers with calving starting in February or March, the breeding season is practically finished. However, ranchers scheduling calving for April and May are in the first or second cycle of the breeding season. Having bull problems during the first 21-day breeding cycle can lead to late bred or open (unbred) cows.

The normal cow-to-bull ratio is 30 cows for an adult bull and 20 cows for a yearling bull. If one bull gets hurt, the other bulls may or may not be able to get the cows bred. Some bulls can settle 50 or more cows in a short season, but that’s the exceptional bull, Hoppe says.

“Bulls can get hurt for multiple reasons,” notes Gerald Stokka, NDSU Extension veterinarian and livestock stewardship specialist. “Bulls will fight to determine a social dominance. The more bulls in a pasture, the more fighting that occurs. Even though the bulls have been feeding together all winter, breeding season brings out the aggressive attitude.”

Bulls jockeying for breeding position with other bulls can lead to bruised and damaged legs and lameness. A bull also may be injured if it lands wrong after mounting a cow or another bull knocks the bull down during breeding, causing severe joint or spinal injury.

A bull that is limping will not service as many cows and may not be breeding at all, Stokka says.

“Bulls are truly athletes,” Hoppe says. “To do the breeding work they do requires them to be sound, with healthy feet and legs, and in good condition, which means not too fat or too thin.”

A sure sign of a problem is a bull lying by himself away from the herd during the prime breeding season. That may be an indication he was hurt in a battle with another bull and left the herd, or he has foot issues such as foot rot.

On hot days, any open water is inviting for cattle to cool off or help fight flies. However, standing in water, especially muddy and manure-laden water, softens the skin around the hoof and can lead to a bacterial infection that can cause foot rot.

The signs of foot rot are obvious lameness and swelling in one foot. This condition usually responds to treatment with antibiotics unless the condition has been ignored or not noticed in a timely fashion, Stokka says.

Other lameness conditions that may be confused with foot rot are an injury to or cracks in the hoof wall that become infected. However, neither of these conditions should show extreme swelling of the skin and the area between the toes, which are symptoms of foot rot.

Producers can vaccinate cattle for foot rot, but bacterial exposure and skin susceptibility may overwhelm local immunity. Stokka says vaccinations are a helpful preventative but not a cure-all. Cattle receiving foot rot vaccinations should receive a booster vaccine. Vaccination should be repeated yearly.

The specialists suggest that to reduce the risk of bulls getting injured while fighting, producers should consider introducing a minimum number of bulls to service the group of cows at the start of breeding season and replacing them with new, fresh bulls two to three weeks later instead of putting three to four bulls with 75 cows at the beginning of the breeding season.

“Basically, this is sending in the reserve team when the first bulls get played out and tired,” Hoppe says. “The thought is that two bulls working 75 cows don’t have time to fight and will need a rest in two weeks.”

“While we are busy haying and harvesting, don’t forget the bulls,” Hoppe says. “It is better to catch the problem early than be totally surprised at pregnancy testing time.”

Cost per pound of calf is struggling