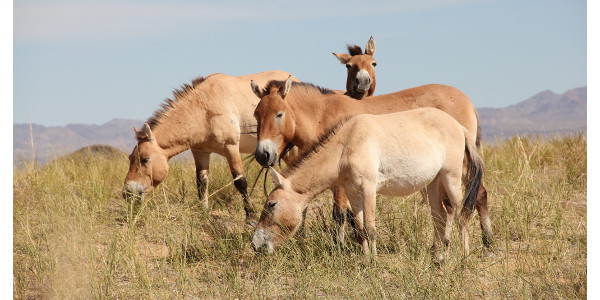 The authors focused on horses, where animals that have never been successfully domesticated – the Przewalski’s horses, either born captive in zoos or in reintroduction reserves – can be compared to domesticates. (Photo by Professor Ludovic Orlando)

FORT COLLINS, Colo. — Humans’ gut microbiomes, responsible for a wide range of digestive, physiological and even behavioral functions, have evolved over thousands of years, as human behavior and activities have changed. In a new study, researchers from Colorado State University and the University of Toulouse say recent human activities have also likely had impacts on the gut microbiomes of animals.

Billions of bacterial cells are present within our guts, providing us with a thousand times more genes than the human genome. This collective set of genes, also known as the gut microbiome, is increasingly acknowledged as a second genome and was built up over millions of years of coevolution between microbes and their host. Changes in the composition of the gut microbiome can have important consequences for human health.

Recent changes in lifestyle – such as those introduced after the transition from hunting-gathering to farming some 10,000 years ago or more recently, during and after the Industrial Revolution – have introduced marked changes in the human gut microbiome. In a new article in Scientific Reports, researchers from CSU and the University of Copenhagen demonstrate that recent human activities have had impacts on the gut microbiomes of animals.

The authors focused on horses, where animals that have never been successfully domesticated – the Przewalski’s horses, either born captive in zoos or in reintroduction reserves – can be compared to domesticates. Their methodology was based on the deep-sequencing of DNA barcodes to identify both the bacterial species that form the gut microbiome, as well as the plants that are part of the animals’ diet.

“For DNA tests to be robust, we had to collect fresh feces in the field and maintain these at cold temperatures up until the analyses would be performed in the laboratory,” said Ludovic Orlando, senior author of the study, professor of molecular archaeology at the University of Copenhagen, Denmark, and CNRS research director at the University Paul Sabatier, Toulouse, France. “This was quite challenging, considering that Przewalski’s horses are endangered wild animals, and that the closest city was about an 8-hour drive from the reintroduction reserve. That would have been impossible without the fantastic team of local rangers from the TAKH association, which has been supporting the conservation of Przewalski’s horses for almost 30 years.”

The results showed that the gut microbiota of the Przewalski’s horses living in the Seer reserve in Mongolia was more diverse than that of Mongolian horses living nearby. Dietary preferences, as well as the social status of the animal within a herd and its age, were also found to impact the composition of the microbiome. Additionally, the gut microbiome of reintroduced animals born in zoos was strikingly less diverse than that of animals born in reintroduction reserves.

This work has two far-reaching implications.

“First, it opens for the possibility that domestication has not only changed the genomes of the animals, but has also impacted the composition of their microbiome,” said Jessica Metcalf, one of the lead authors of the study and assistant professor of animal sciences at Colorado State University. “If true, breeding programs will have to pay attention to microbiomes if aimed at preserving the whole functional potential of extant breeds. This has potentially massive consequences for the agricultural industry.”

“Second, now that we know that captivity also affects the long-term composition of gut microbiomes, we need to consider the potential consequences on the animal’s chances of survival once reintroduced in the wild,” said Orlando. “Gut microbiomes might thus be an important factor in the success of reintroduction programs.”

The full report, “Evaluating the impact of domestication and captivity on horse gut microbiome,” can be found at https://www.nature.com/articles/s41598-017-15375-9