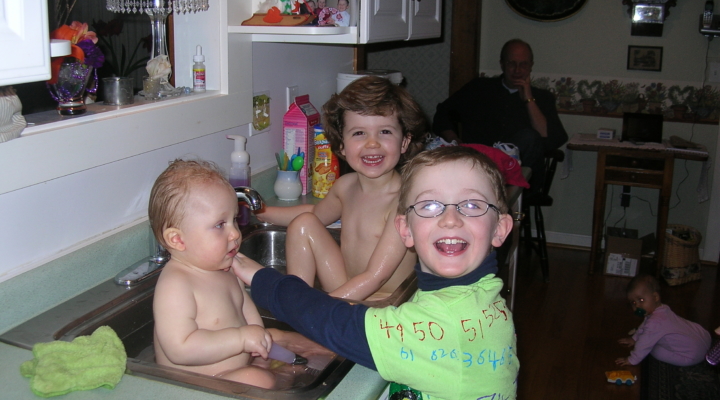 This summer has been interesting.

I started it with shin splints and am ending it with a splinted finger.  Am I getting old?

Naw…I refuse to be any age older than 35.

When I bought my new house, last November, the dishwasher didn’t work right.  I had a couple of people I know look at it, clean it, and check it out.   It remained finicky.

So when the electrical board stopped responding to “off” and I noticed one day that the dishwasher had been running the same load of dishes for 6 hours I decided I was done fiddling with it and it has been silent ever since.

Coming off of the purchase of a new house and with the expenses of the holidays I held off on buying a new “kitchen helper.”  I figured we could do it the old fashioned way for awhile–wash and dry.

8 months later, we are still washing and drying.   Truly, it hasn’t been that bad…until the finger splint.

To give dish-washing by hand its due credit, I have to say that some of the best conversations in my life have been around the kitchen sink doing dishes.

Some of the hardest ones too.

Even though we had a dishwasher growing up I can still see my mother standing there scrubbing pots and pans after supper, the ones that were too dirty for the machine.

It was kind of soothing. One of those overlooked rhythms of life that comforts us. You don’t miss it until it’s notably gone, your mother, doing dishes.

At the lake, where my family has spent its summers for the last 60+ years there has never been a dishwasher upgrade for fear of knocking the septic system out of whack.

So around the kitchen sink at the lake is where my sisters and mother, aunts, and grandmother always could be found after dinner. Kibitzing about whatever the hot topic was for the moment.

Sometimes kids would get thrown in after too, splashing and tubbing in the kitchen sink, it really was the only place to bathe the babies.

The sink was where the truths always came out, the speculations, the heart of all the family matters.

You wouldn’t believe how many of us could fit in the tiny crowded kitchen space, all with dish towels listening intently and chiming in. Whisper, whisper.

It was while doing dishes I told my mother I was pregnant with her first grandchild. I can still hear her quiet squeal of excitement as she turned to me with her hands still in the dishwater, having all she could do to contain herself without splashing the dish water all over.

The kitchen sink has seen tears of frustration, tears of sadness. Tears that have been squelched and hidden from the rest of the pack and shed into the sink of warm, soapy water.

Many a long look have been taken out the kitchen sink window. Thoughts swallowed up, thoughts conjured up. Some shared, some forever silent. The sink knows…

With the dishwasher out of commission since the winter it has been rather nice to bring back the routine of dishes every night. I love drawing up the clean, freshly soaped dish water and it usually signals that the tea water has been turned on to start getting hot.

I certainly have spent more time in the kitchen this year than ever before… but honestly the kitchen is where I am most comfortable… feeding my family, cleaning up after them, and listening.

There is something about doing dishes that just brings it all in, all of them in to share their thoughts.

Despite all of that closeness, I am thinking that it might be time to replace the dishwasher.

This year it was shin splints and broken fingers, who knows what next summer will bring as I fully round the corner to middle age.   Maybe I should prepare.

And just because I have a working dishwasher doesn’t mean that I have to use it all the time.  It wouldn’t be right to not have the kids do dishes in some capacity.  It’s a rite of passage.

Have a happy last weekend of summer.  I won’t be water-skiing this year, instead you will find me at Lowe’s in the appliance department.  🙂

Rainy Day at the Fair