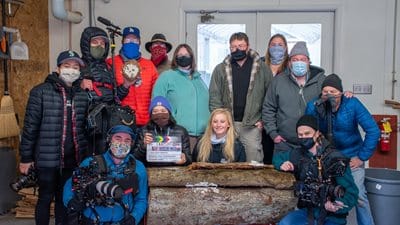 The Washington State Department of Agriculture (WSDA) project to find and trap the Asian giant hornet is now the subject of a new documentary available to stream on Discovery+ beginning this Saturday. (Courtesy Photo)

OLYMPIA, Wash. — The Washington State Department of Agriculture (WSDA) project to find and trap the Asian giant hornet is now the subject of a new documentary available to stream on Discovery+ beginning this Saturday.

By chance, filming began the day before WSDA entomologist Chris Looney caught the first live Asian giant hornet in the U.S., with the crew capturing footage throughout the project, including when WSDA found and eradicated an Asian giant hornet nest.

In addition to documenting key developments in the quest to find an Asian giant hornet nest, the film also shows the extensive collaboration between government agencies and the public, including the widespread trapping work by members of the Mt. Baker Beekeeper Association and other citizen scientists around the state.

“This film is an opportunity to educate people in an entertaining way about the work that is being done to prevent Asian giant hornets from establishing in the Pacific Northwest,” Sven Spichiger, WSDA managing entomologist, said. “Viewers will see some great shots of these hornets and the film does a good job showing how important the partnership between government agencies and the public has been to this effort.”

“When it comes to preventing and stopping invasive species, we all have a role to play and this film demonstrates what can be accomplished through collaboration,” said Justin Bush, executive coordinator of the Washington Invasive Species Council. “We are excited to see how the film will increase awareness of invasive species with such a large audience.”

The film begins airing as WSDA’s Pest Program continues to evaluate results from last year’s giant hornet project and plans for the 2021 survey season, which will begin this summer.