Home » Do we have to separate you two? Best, worst companion plants 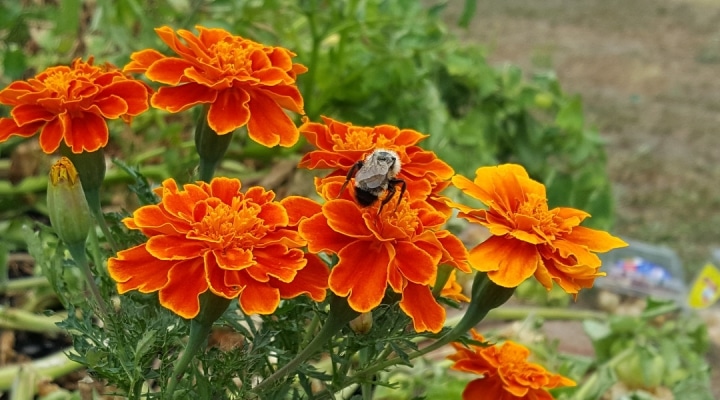 WASHINGTON — We gardeners spend so much time stressing over what our plants need that we often forget they grew just fine for millennia without us. Suppose we step back from our self-aggrandizing human nature and take our cues from actual nature instead?

That would save time, money and the environment by reducing the need for fertilizers, pesticides, herbicides — even garden stakes.

Many plants co-exist in either symbiotic or non-complementary relationships. Native Americans noticed this centuries ago, and used their findings to take advantage of plants’ natural inclinations.

Their “Three Sisters” method of growing corn, beans and squash together is perhaps the most well-known example of “companion planting,” a practice that puts plants to work to keep themselves and their neighbors healthy.

The trio serve each other well: As the squash spreads its large, prickly leaves over the ground, it provides shade to keep roots cool, suppresses weeds and discourages animal browsing. Corn grows upright to support the vining beans, which repay the debt by fixing nitrogen in the soil to fertilize all three plants.

Like those beans, all legumes, such as peas, lentils, soybeans and peanuts, capture nitrogen from the air and convert it into a form that nourishes the soil – and the plants growing in it. At the end of the season, alfalfa or clover can be planted in cleared-out vegetable beds and turned over the following spring to add valuable nutrients to the soil. Those nutrients reduce, and can even eliminate, the need for fertilizer during the growing season.

Some plants deter insects or stave off disease. Basil, for instance, repels mites, aphids and mosquitoes, and has anti-fungal properties. It also repels tomato hornworms, proving it works just as hard in your garden as in your Caprese salad.

Tomatoes pay it forward by protecting asparagus from beetles, and roses from black spot, an often-deadly fungal disease. But keep tomatoes away from potatoes, cabbage and fennel, which would stunt their growth. Nasturtiums, on the other hand, improve the flavor of their tomato and squash neighbors.

French and African marigolds exude a chemical that repels many insects and outright kills nematodes, parasitic eelworms that damage the roots of vegetable and fruit crops.

Chrysanthemums produce pyrethrins, natural chemicals that repel ticks, fleas, mosquitoes, flies and other insects so well that they’ve been emulated to create synthetic pyrethroids, which are sold as herbicides and insect repellents. Why treat your plants with laboratory-made chemicals when their inspiration is naturally available – and doesn’t carry a warning label?

Got slugs? Plant lavender. Similarly, chives chase aphids from lettuce and roses, and sage repels cabbage moths. Oregano and radishes protect against squash beetles and cucumber beetles, but sunflowers inhibit the growth of beans and potatoes.

Zinnias and parsnips attract ladybugs, which are gluttons for aphids and cabbage flies. So do parsley and dill, but pick one or the other because they don’t get along with each other.

Onions and garlic will stunt your asparagus, beans, leeks and parsley, but will discourage insects and diseases from beets, cabbage, carrots, lettuce, sage, strawberries and tomatoes.

Cabbage and cauliflower, although related, are like feuding cousins that have to be seated separately or they’ll suck the fun out of your family functions.

Plant friends with friends, and everyone will get along. Your garden – and your wallet – will thank you.

Editor’s Note: Have you heard about The Daily Dirt? There’s still time to take part! Donate to the IndieGoGo campaign, today. June 2nd is your last chance to take part!

Families that garden together, grow together!
June 21, 2022