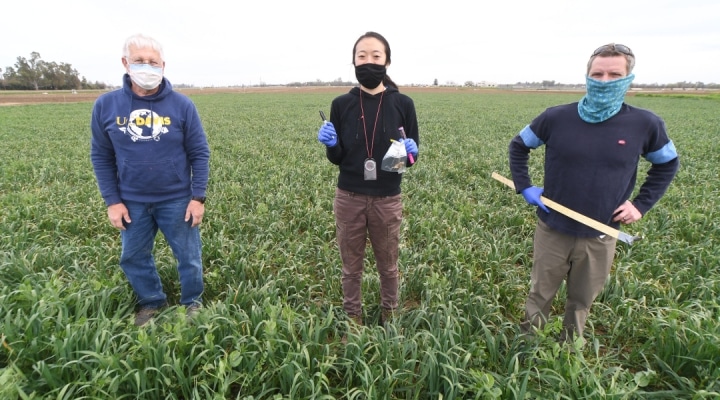 DAVIS, Calif. — Historically, chickens were not a rare sight on farms, where they contributed to soil fertility as they freely pecked and scratched around vegetable gardens and crop land. Now, UC Cooperative Extension specialists have launched a research project to quantify the potential for chickens to be part of safe and sustainable commercial organic vegetable production.

“It’s not a new idea. A lot of farmers are trying this kind of thing,” said UC Davis International Agriculture and Development graduate student Faye Duan, the project coordinator. “But there is currently little scientific information for using chickens on a bigger scale, especially in terms of food safety concerns.”

In the trials, chickens are introduced as part of a rotation that includes cover crops and a variety of vegetable crops. In California, chickens were placed on research plots in April following a winter cover crop of vetch, peas, fava beans and oat grass.

“We don’t let the chickens run around the field,” Duan said. “We keep them inside of chicken tractors to protect them from predators.”

Twenty-nine birds live in each 50-square-foot tractor, essentially a floorless chicken coop on wheels. The tractors, built by UC Davis students Mallory Phillips and Trevor Krivens, are wood frames covered with mesh and plywood. Each day, the tractors are moved to a different part of the plot, where the birds can graze on cover crop residue and deposit manure. Adjusting to the daily move took time, Duan said.

“The first day, the chickens were confused. We had to go slowly. It’s a learning process for the chickens and us,” she said. “But now, the chickens are excited to move to a new spot where they have fresh food to graze on.”

After 24 days on pasture, the chickens will be removed, and become part of the project’s meat study.

“We have broiler chickens that are raised for meat,” Duan said. “Some people believe chickens that graze and eat grass taste better and are more nutritious. It will be part of the study to look at the chicken’s meat quality.”

Once the chickens have done their part on the research plots, vegetables are planted amid the leftover cover crop residue and chicken manure. This summer, the experiment in California will grow processing tomatoes. Subsequently, melons, eggplant, spinach and broccoli will be part of the vegetable rotation in California or the other states involved in the project. Other replications of the trial will have the chickens immediately follow the vegetable harvest so they can graze on the crop leftovers before the cover crop is planted. Comparing the soil health, fertilizer needs, chicken quality and other factors will help the scientists optimize the rotation.

“Vegetable yield will be an important indicator of success,” Duan said.

Soil samples will be tested to determine the presence or absence of the bacteria Salmonella after the chickens have been removed, said Pitesky, a poultry specialist and a project lead. Salmonella is a bacteria that can be part of poultry’s microbiome. If the bacteria contaminates human food, it can cause illness.

“Since Salmonella lives in the chicken gastrointestinal system, when it gets into the soil, it will eventually be out-competed by bacteria more adapted to soil than the gut of a chicken,” Pitesky said. “There are many different types of Salmonella, and only a select few found in birds are the ones that are harmful to humans. Nevertheless, it is very important to test and use various practices to mitigate the presence of Salmonella on land that will be used for crop production following poultry.”

Early results of soil tests in Iowa and Kentucky detected Salmonella in the soil where chickens grazed, however, the bacteria disappeared very quickly.

CDFA announces vacancy on the Nursery Advisory Board