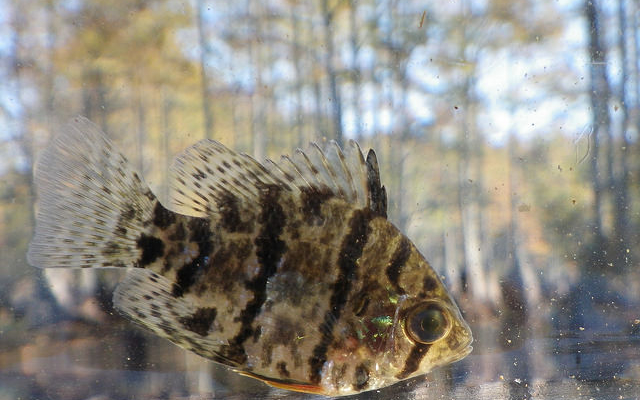 To biologists, the decline or loss of a species is nothing short of a crime. And fittingly, they’re investigating it like one. Just as the suspect in a crime scene drama gets careless and leaves behind a fingerprint or DNA, fish - and all organisms, for that matter - are constantly leaving evidence. Evidence in the form of environmental DNA (“eDNA”) (Photo by Fishes of Georgia Photo Gallery, creative commons/flickr.com)

COLUMBIA, S.C.–To biologists, the decline or loss of a species is nothing short of a crime. And fittingly, they’re investigating it like one. Just as the suspect in a crime scene drama gets careless and leaves behind a fingerprint or DNA, fish – and all organisms, for that matter – are constantly leaving evidence. Evidence in the form of environmental DNA (“eDNA”) – that which has left the organism but persists in its surroundings for some time, carrying the unique genetic signature of the species.

In the case of fish, DNA enters the water from scales and slime flushing off or waste and gametes being excreted. Water samples can then be taken and analyzed for DNA to detect the presence of a target species, greatly reducing the amount of effort required to actually capture a potentially elusive critter using more labor-intensive methods.

It’s a process seeing increasing application in both conservation of imperiled fishes and monitoring of invasive species, from confirming the existence of the extremely rare Alabama Sturgeon, feared to be extinct but recently discovered using eDNA, to tracking the spread of destructive Asian carp in the Great Lakes region. And it is particularly useful when trying to find a reclusive, 2-inch-long fish, only a handful of which might live amongst acres of snaggy swamps or miles of meandering blackwater creeks.

In South Carolina and other eastern states, an investigation is underway to find evidence of the Blackbanded Sunfish, a silver dollar-sized boldly barred fish of blackwaters and backwaters in the coastal plain. This fish is getting harder to come by, especially in other portions of its historic range such as Georgia and Maryland, where biologists searching in former locations are coming away empty-handed. Reasons for the fish’s apparent decline are not entirely understood, and a State Wildlife Grants-funded collaboration between the SCDNR Population Genetics Lab, SCDNR Freshwater Fisheries Research program and Georgia Department of Natural Resources aims to address this issue and help conserve this unique species and others facing similar problems.

But eDNA technology for any species can’t simply be purchased from a biological research supply company just yet. Developing the tool for use in the field may take years of rigorous lab work, in this case by Dr. Tanya Darden’s team at the SCDNR’s Population Genetics Lab, located at the Hollings Marine Laboratory in Charleston. Amid wall-to-wall experimental tanks containing the beautiful fish, studies were conducted to ensure that the process worked in a range of water conditions and fish densities and could zero in on Blackbanded Sunfish without being “fooled” by the DNA of closely related species such as Bluespotted Sunfish. The final product was both specific and sensitive, capable of detecting a fragment of Blackbanded Sunfish DNA weighing as little as one quadrillionth of a gram (one quadrillionth the weight of a penny).

With the lab methods perfected and protocols in place, researchers set out across the swamps and sloughs of South Carolina and Georgia armed with an unorthodox arsenal of fish sampling gear – water sample bottles (10 samples taken throughout each site) and plenty of latex gloves and bleach, critical for cleaning equipment and avoiding DNA cross-contamination among sites. Water samples were collected at 30 sites in each state from places that looked suitable for the reclusive fish, including several locations in Georgia at which the species had not been seen in many years despite countless hours of searching with traditional sampling gears such as nets and traps. In addition to the water samples, habitat features were measured including water depth, flow rate and the type and amount of aquatic vegetation, in order to help identify the habitat types that support this sensitive species.

Then came the moments of truth, as the hundreds of water samples were filtered and the resulting material analyzed with a method called polymerase chain reaction (PCR). In PCR, just as a key is designed to fit only one lock, special lab-developed “primers” are mixed with the sample material and seek out and bind with the unique sequence of Blackbanded Sunfish DNA – and only Blackbanded Sunfish DNA. Once identified, even the smallest amounts of DNA are then replicated by the PCR process to a level that can be detected by specialized equipment, essentially indicating “Yes, Blackbanded Sunfish DNA is present.” If the sunfish DNA is not there, the reaction does not happen, and the equipment does not indicate a detection.

As the results trickled out from the lab, excitement and optimism quickly rose among biologists. Nine of 30 sites in South Carolina were positive for Blackbanded Sunfish, the sites spread across most of the midlands. In Georgia, where only a handful of populations were previously known and over a decade had passed since the fish was last seen in certain places, five sites were positive, confirming the existence of the species in at least four new locations from what is still a very limited range in the southern part of the state.

And although the news was positive in both cases, the results and follow-up surveys illustrate a puzzling discrepancy between states – an extremely patchy distribution that is mirrored elsewhere across the range of this fish. South Carolina appears to be a relative stronghold for the species, with populations found in suitable habitat across the entire Sand Hills region. Crews returned to DNA-positive sites with traditional sampling gears and in all cases in South Carolina set eyes on the fish, from a few individuals to as many as 34 collected in a matter of hours (a small piece of each fish’s fin was clipped and preserved for assessment of population genetic health before the fish were released).

Georgia, on the other hand, remained quite a different story. Hundreds of hours of scouring the DNA-positive sites initially revealed no Blackbanded Sunfish. Eventually a couple individuals were collected during other fish surveys nearby – an exciting yet telling moment, as the fact remained that this species appears to be exceedingly uncommon in the state.

But why? The areas occupied by Blackbanded Sunfish in Georgia are rather remote and for the most part undisturbed by human activity; there is no apparent “smoking gun” for their low numbers and restricted range compared with neighboring South Carolina. The species has long been rare in Georgia, but collection rates still appear to be dropping in recent years, and such declines are seldom caused by a single issue and therefore can be difficult to decipher.

The fish’s scarcity in Georgia still hits home with biologists across the state line, who are careful not to let their guard down just because the species currently appears relatively secure in South Carolina waters. Declines in Blackbanded Sunfish elsewhere may foretell a similar fate for fish in the Palmetto State (a major reason for its status of High Priority in the State Wildlife Action Plan), and the contrast in situations sets an ideal stage on which to hopefully zero in on these patterns and factors influencing the abundance and distribution of this blackwater gem. Future study objectives include the development of models to predict watersheds with conditions most likely to support Blackbanded Sunfish – an additional method that could pay immediate dividends by helping to locate potentially unknown populations in a huge state like Georgia, for example. Furthermore, such tools could also be used to identify sites most suitable for reintroduction efforts if necessary.

Even though the fish themselves might be hard to see, the value of eDNA technology stands out clearly. This tool provides an efficient way to locate populations and focus future efforts with limited resources, enhancing the ability of researchers to protect and restore the species. After all, simply knowing that the fish is there is the first piece of the puzzle.

Funding for this study was supplied by the State Wildlife Grants program administered by the U.S. Fish and Wildlife Service.