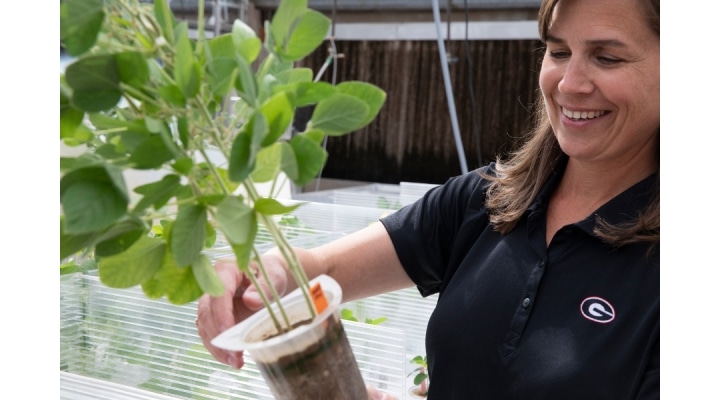 As part of The SCN Coalition’s “Let’s Talk Todes” video series, their new “Research Collection” series features Mitchum explaining how SCN populations in the Tode Farm serve as work horses for the soybean breeding program, as well as soybean researchers and nematologists across the country. The findings from this soy-checkoff funded initiative brings new tools to soybean growers in the fight against parasitic nematodes.

Mitchum, who refers to the collection as the “Tode Farm,” says the nematodes have been adapted to reproduce on many of the current sources of resistance used in SCN resistant soybean varieties and assisted in the soybean checkoff funded SCN genome sequencing project.

“With this genetic blueprint in hand, we now have the opportunity to exploit this rich collection of genetic resources to identify the virulence genes SCN uses to reproduce on resistant varieties,” says Mitchum. “More importantly, the door is now open to developing a molecular diagnostic tool to determine the virulence of field populations and prescribe the best type of resistance for growers to plant.”

Why does source of SCN resistance matter to soybean farmers?

Mitchum explains that resistance genes in soybeans have different modes of action. “In 2012, the checkoff was instrumental in allowing researchers to identify the genes underlying resistance to SCN,” she explains. “Researchers were able to clone the resistance genes found in the most common source of SCN resistance known as PI 88788 as well as a gene that regulates the Peking type of resistance. This allowed our breeders to develop molecular markers on the genes.”

Using the molecular markers in the lab, University of Georgia Soybean Breeder and Geneticist Zenglu Li can develop new modes of action by pyramiding resistance genes to enhance the longevity of nematode resistance. “We have a robust pipeline of materials to deliver high-yielding varieties that are resistant to SCN and root-knot nematode,” he says. “The gene marker selection accelerates the breeding cycle.”