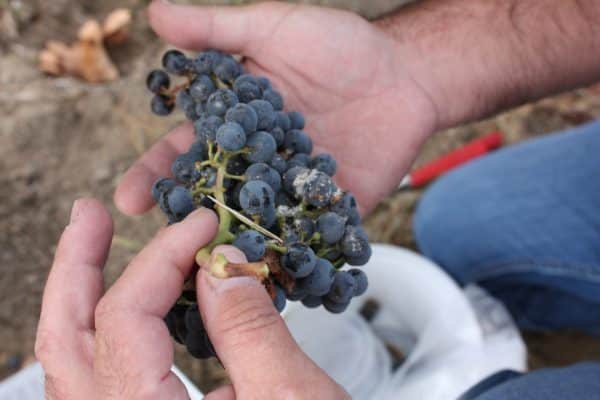 A cluster of grapes infested with grape mealybug from a vineyard on Red Mountain. (Courtesy Photo)

“Grape mealybug management is ranked as the number one issue for wine grape growers in Washington,” said Doug Walsh, professor of entomology and agrichemical education specialist.

Mealybugs are the main carrier of grapevine leafroll disease, which causes grapevines to weaken and lose their vigor. In red grape varieties, leaves of infected vines turn bright red like fall leaves, while symptoms are more subtle in white grape varieties.

Grape growers are paid for their fruit based on tonnage as well as sugar content. A leafroll infection can lower the sugar content of growing grapes.

“Currently there is no cure for grapevines infected with leafroll disease, but replacing infected vines with clean vines can at least slow the spread of the virus within a vineyard,” said Melissa Hansen, Research Program Director for the Washington Wine Commission.

However, growers often see mealybugs again in as little as two years, even after putting in new grapevines.

When mealybugs hatch, young nymphs known as “crawlers” spread the disease by feeding on infected vines, then moving on. Crawlers are small enough to be carried by the wind into neighboring vineyards, further spreading the disease.

Walsh has worked with the wine and grape industry for over 20 years, and has been searching for a way to contain the spread of mealybugs. Now, he is hopeful that the pest can be controlled through pheromones.

“Our hope is to disrupt mating by saturating vineyards with female sex pheromones,” he said.

In his experiment, scientists attach pheromone-coated twist-ties to grapevines. They hypothesize that male mealybugs become confused by the pheromones and cannot find females, which in turn prevents mating, shrinking the next generation of crawlers.

“Mating disruption has been used for years here in Washington, notably for codling moth control in apples,” Walsh said. “It’s a tried and true technology – and just a matter of learning whether or not these pheromones will work in grape mealybug management.”

Funding for the PhD student Stephen Onayemi, who is conducting these preliminary studies, is being provided by the Washington State Grape and Wine Research Program and the WSU Department of Entomology. Ste. Michelle Wine Estates is providing the test sites in their vineyard.

Results from Walsh’ pilot studies will be available in fall 2021.