Home / Pennsylvania / Discovery of flowering gene in cacao may lead to accelerated breeding strategies
A new user experience is coming! We'll be asking you to login to your Morning Ag Clips account March 1st to access these new features.
We can't wait to share them with you! Read more here. 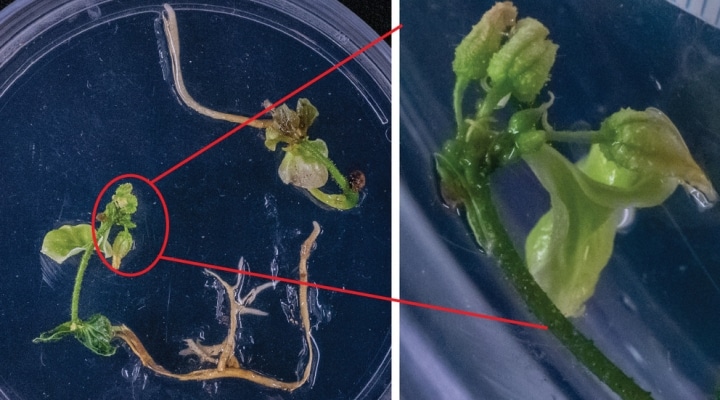 In the research, embryonic cacao, over expressing the florigen gene, develop tiny flowers in tissue culture. This study is significant because cacao trees typically don't flower until they are between three and eight years of age. Such early flowering promises to greatly speed up breeding to develop disease-resistant trees. IMAGE: SARAH PREWITT/PENN STATE

UNIVERSITY PARK, Pa. — For the first time, Penn State researchers have identified a gene that controls flowering in cacao, a discovery that may help accelerate breeding efforts aimed at improving the disease-ridden plant, they suggested.

Characterizing the Flowering Locus T gene in cacao, responsible for the production of florigen — a protein that triggers flowering in most plants — is important, according to study co-author Mark Guiltinan, J. Franklin Styer Professor of Horticultural Botany and professor of plant molecular biology. He expects this advancement to enable scientists to develop disease-resistant trees faster, which is critical because 20-30% of the world’s cacao crop is lost to disease annually.

“Breeding tree crops like cacao is very slow and can take 20 or more years to release a new variety,” he said. “Knowledge of the mechanisms of flowering may lead to methods to accelerate cacao breeding and to develop trees that produce fruit sooner than conventional varieties, which takes two to four years. Each year we move closer to these goals as we continue to explore the molecular biology of the cacao tree.”

Testing her theory, she overexpressed that gene to trigger very early flowering in cacao “plantlets” in the lab and showed that those tiny flowers produced grains of pollen that were viable.

“To find the flowering gene in cacao, we used a bioinformatics approach, taking the sequence of the gene from Arabidopsis and looking for similar genes in the cacao genome,” Prewitt said. “I found the cacao gene that promotes flowering because the sequences look very similar.”

In findings published today (May 17) in BMC Plant Biology, the researchers reported on the role of cacao’s single flowering gene, Flowering Locus T, demonstrated by gene-expression analysis. They also documented the results of their introduction of the flowering gene from Arabidopsis into cacao. Overexpressing that gene resulted in “precocious” flowering in cacao tissue culture, they explained, which demonstrated the extremely similar function of florigen genes and the mechanisms that control flowering in both Arabidopsis and cacao.

While intriguing on a scientific level, the discovery of the cacao Flowering Locus T gene could have potentially significant, real-world impact, Guiltinan noted, by helping to improve the lives of millions of cacao farmers in developing countries sooner than previously thought possible. He pointed out that the breeding of cacao varieties with high yields, disease resistance, resilience to climate change and desirable quality traits is an important component of a broader goal to develop sustainable farming systems for cacao.

“Better cacao varieties can increase the income, and thus the well-being, of cacao farmers who live in some of the most impoverished regions of the world, such as West Africa,” he said. “In turn, this will benefit the economies of these countries and the environment and will provide a sustainable source of the main raw ingredient for the chocolate industry.”