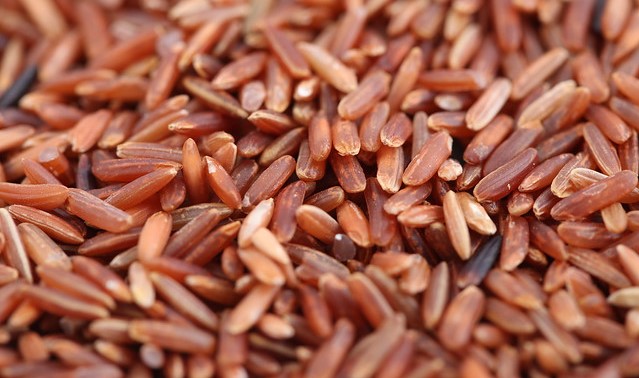 Gene-editing technologies could eventually be used to precisely insert genes in rice plants, overcoming the issue of linkage drag, but first, genes that boost rice immunity need to be identified or engineered. (Wutthichai Charoenburi, Flickr/Creative Commons)

WASHINGTON — Researchers have uncovered an unusual protein activity in rice that can be exploited to give crops an edge in the evolutionary arms race against rice blast disease, a major threat to rice production around the world.

Magnaporthe oryzae, the fungus that leads to rice blast disease, creates lesions on rice plants that reduce the yield and quality of grain. The fungus causes a loss of up to a third of the global rice harvest, roughly enough to feed more than 60 million people each year.

Various strategies to ward off the fungus have been employed, but a sustainable approach has not yet been developed. Cost and environmental concerns have limited the success of toxic fungicides. And a phenomena called linkage drag, where undesirable genes are transferred along with desired ones, has made it difficult for breeders to produce varieties of rice that exhibit improved disease resistance but still produce grain at a desired rate.

Gene-editing technologies could eventually be used to precisely insert genes in rice plants, overcoming the issue of linkage drag, but first, genes that boost rice immunity need to be identified or engineered.

A team of researchers in Japan and the U.K. report in the Journal of Biological Chemistry that a particular rice immune receptor–from a class of receptors that typically recognize only single pathogenic proteins–pulls double duty by triggering immune reactions in response to two separate fungal proteins. The genes that encode this receptor could become a template for engineering new receptors that can each detect multiple fungal proteins, and thereby improve disease resistance in rice crops.

Rice blast fungus deploys a multitude of proteins, known as effectors, inside of rice cells. In response, rice plants have evolved genes encoding nucleotide binding-leucine-rich repeat proteins, or NLRs, which are intracellular immune receptors that bait specific fungal effectors. After an NLR receptor’s specific fungal effector binds to the bait, signaling pathways are initiated that cause cell death.

“(The cells) die in a very localized area so the rest of the plant is able to survive. It’s almost like sacrificing your finger to save the rest of your body,” said Mark Banfield, professor and group leader at John Innes Centre in Norwich, England, and senior author of the study.

After learning from previous work that the fungal effectors AVR-Pia and AVR-Pik have similar structures, the researchers sought to find out whether any rice NLRs known to bind to one of these effectors could perhaps also bind to the other, Banfield said.

The scientists introduced different combinations of rice NLRs and fungal effectors into tobacco (a model system for studying plant immunity) and also used rice plants to show if any unusual pairs could come together and elicit immune responses. An AVR-Pik-binding rice NLR called Pikp triggered cell-death in response to AVR-Pik as expected, but surprisingly, the experiments showed that plants expressing this NLR also partially reacted to AVR-Pia.

The authors took a close look at the unexpected pairing using X-ray crystallography and noticed that the rice NLR possessed two separate docking sites for AVR-Pia and AVR-Pik.

In its current form, Pikp causes meager immune reactions after binding AVR-Pia, however, the receptor’s DNA could be modified to improve its affinity for mismatched effectors, Banfield said.

“If we can find a way to harness that capability, we could produce a super NLR that’s able to bind multiple pathogen effectors,” Banfield said.

As an ultimate endgame, gene-editing technologies could be used to insert enhanced versions of NLRs–like Pikp–into plants, Banfield said, which could tip the scale in favor of rice crops in the face of rice blast disease.

–American Society for Biochemistry and Molecular Biology
via EurekAlert!