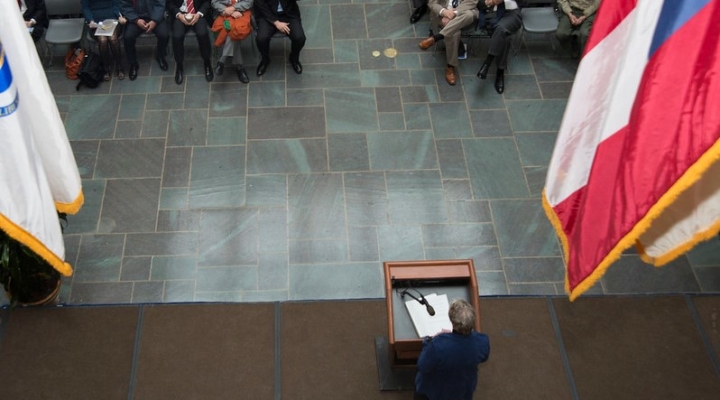 Dr. Alfonso Clavijo has been appointed as Director of the National Bio and Agro-Defense Facility (NBAF). (Stock photo via U.S. Department of Agriculture, Flickr/Creative Commons)

MANHATTAN, Kan. — Dr. Alfonso Clavijo has been appointed as Director of the National Bio and Agro-Defense Facility (NBAF), a state-of-the-art U.S. Department of Agriculture (USDA) research and diagnostic facility designed to protect the nation’s agricultural systems and stakeholders against the threat and potential impact of serious animal diseases.

“Dr. Clavijo brings with him a wealth of technical knowledge in the diagnosis of transboundary, emerging and zoonotic diseases,” said Dr. Chavonda Jacobs-Young, Administrator for USDA’s Agricultural Research Service (ARS). “As NBAF’s first permanent director, his extensive leadership experience will be a great asset in helping NBAF achieve its vision of being a national asset that protects U.S. agriculture and consumers through cutting-edge research, diagnostics, training, and development of vaccines and other countermeasures.”

ARS partners with USDA’s Animal and Plant Health Inspection Service (APHIS) to operate NBAF. The facility is currently under construction by the U.S. Department of Homeland Security (DHS) with commissioning scheduled for completion in 2021.

Clavijo, who starts October 13, will play a key role in ensuring the smooth transition of responsibility from DHS to USDA once the 574,000 square-foot facility becomes fully operational in 2023.

Prior to his appointment at NBAF, Clavijo served as Laboratory Executive Director of the Canadian Food Inspection Agency’s (CFIA) National Centres for Animal Disease, which operates laboratories in Winnipeg and Lethbridge. As Director, Clavijo oversaw the administration of diagnostic services, related technology development and research to detect and prevent transboundary, emerging and zoonotic animal diseases.

He also directed the management of biosafety level (BSL) 2-4 facilities that allow for the contained study of pathogens that cause foreign animal diseases, including foot-and-mouth, African swine fever, classical swine fever and highly pathogenic avian influenza.

Under Clavijo’s leadership, CFIA’s National Centre for Foreign Animal Diseases in Winnipeg was named by the Food and Agriculture Organization (FAO) as reference center for emerging and zoonotic pathogens.

Clavijo earned a doctorate degree in Veterinary Microbiology/Virology while attending the University of Guelph in Ontario, Canada, from June 1990 to March 1995 and a Doctor of Veterinary Medicine degree from National University in Bogota, Columbia, 1986.

Clavijo has published numerous scientific works and continues to serve as an adjunct professor or advisor at affiliate organizations.

Keep enjoying your garden's flowers by drying them