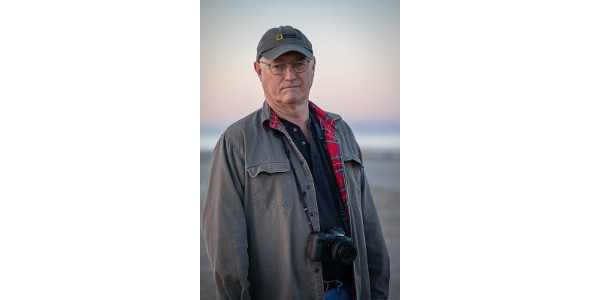 MANHATTAN, Kan. — Former National Geographic environment editor Dennis Dimick offered a dose of reality to the debate on the world’s changing climate Monday, but noted that humans have the ability to provide solutions to complex challenges.

“The basic equation that stands today is that we have benefitted greatly by the use of ancient carbon fossil fuels, like coal and oil and natural gas,” said Dimick, who draws heavily from 35 years experience working and traveling the world for the national magazine, the last 10 of which were as the executive environment editor.

“Our use of those resources has allowed us to do many things to build the modern world, but we’ve begun to see some by-products and effects that are changing the chemistry of the atmosphere. What’s happening is that we are seeing changes on the planet speeding up. Ice is melting, seas are rising and we are seeing more extreme storms.

Dimick was the sixth speaker in Kansas State University’s noted Henry C. Gardiner Global Food Systems lecture series, which encourages science-based discussion on issues important to growing food around the world. The series is funded by Gardiner Angus Ranch of Ashland, Kansas and hosted by K-State’s College of Agriculture.

The full lecture, titled ‘Living in the Human Age,’ can be viewed online.

Scientists often refer to the acceleration of environmental processes as the anthropocene epoch, or as Dimick says, “a period of time when humans have become the dominant force on the planet.”

“Did it start 10,000 years ago when we first started transforming our landscapes and domesticating them for growing food?” Dimick asked. “Or was it in the 1700s when we learned how to dig up ancient fossil carbon energy (coal) and light it on fire, changing the chemistry of the atmosphere? Or did it start in the last century when we first learned how to blow up bombs?

“It’s a new way to contemplate our relationship with Earth. We do know that the mark of our presence will endure in the geologic record long after we are gone.”

Through words and pictures, Dimick said National Geographic aimed to connect people back to the land on which they live, “and to the people who grow that food and keep us all from starvation.”

“We wanted to make agriculture not just big and abstract and mega-scale, but we wanted to make it personal. We wanted people to meet the people that grow food for themselves and for us, whether it’s in Mali or Peru.”

Within that framework, Dimick’s team often encountered sobering realities, such as satellite pictures that show that the Arctic cap at the North Pole has shrunk in half from 1979 to 2012.

“Scientists are trying to figure out why the jet stream is becoming wobbly and more unstable,” Dimick said. “They think there’s a connection to the loss of ice in the Arctic and the unusual behavior of the jet stream that is causing things like the storm that hit eastern Nebraska in late March. We’re seeing more extreme weather events across the country; for example, last year in (the state of) Washington we had 70 inches of rain, which was 20 percent greater than we had ever had before.”

Dimick said much of North American agriculture has been affected by warming temperatures and uncertain weather patterns. He showed a chart that indicates an alarming trend of decreased production of wheat, potatoes, rice and corn – including signs that the trend will continue through 2040.

“As one who has kind of been studying this issue for a very long time, there’s a paradox,” he said. “We hear of the need to double world food production to be able to grow more food for a rising population, but the trends are showing us that we’re going in the wrong direction.”

Mark Gardiner, president of Gardiner Angus Ranch and son of Henry C. Gardiner, closed Monday’s lecture with the challenge that drives the series. “When we think about society and policy, we have complicated questions, and we have a delicate balance. It’s our job to figure it out.”

Lecture on nutrition and sustainability
March 20, 2019