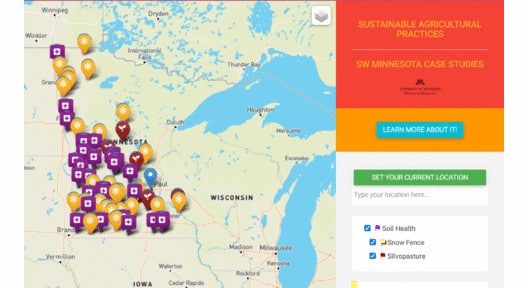 The Farmmaps website utilizes an interactive state map. Users can explore by location and search for specific sustainable farming methods. The project has been in the works since 2018, led by the University of Minnesota Extension and others. (Courtesy Image)

ST. PAUL, Minn. — For over 150 years the Ackerman family has been farming in Jackson County, Minnesota. Jerry and Nancy Ackerman say they are proud to carry on that legacy. From their 1,200-acre farm in Lakefield, the Ackermans produce corn, soybeans and alfalfa — the same crops that they have been growing for most of their lives. But today, it’s the ideas that the Ackermans are helping to sow in their community that are putting their family farm on the map.

The Ackermans’ farm is one of 45 across the state helping to advance Farmmaps, a new online tool unveiled this year. The first of its kind, Farmmaps is a free, interactive platform for Minnesota farmers to create community, network and share valuable farming case studies. The project has been in the works since 2018, led by the University of Minnesota Extension Southwest Regional Sustainable Partnership (Southwest RSDP) and the Center for Integrated Natural Resources and Agricultural Management (CINRAM), and supported by the Sustainable Farming Association of Minnesota and many farmers, students and community partners.

Farmmaps focuses on sustainable agriculture and forestry practices that benefit Minnesota’s landscape and have proven fruitful for Minnesota farmers. Users can pull up the tool on their phone or desktop computer. Utilizing an interactive map of the state, farmers can instantly locate and learn from the experiences of peers who have experimented with soil health, snow fences and silvopasture methods.

“They’re innovators. I mean they really are,” said Dean Current, Farmmaps project lead and CINRAM program director. “Many of the farmers we work with are kind of researchers in their own right—they’re trying different approaches and combinations.”

The Ackermans had been trying out new farming techniques on their own for years, when in the mid-2000s they took part in a study through the University of Minnesota Extension to implement cover crops. It was an unconventional move at the time. “Of course, I was the odd guy in the neighborhood,” Jerry recalled with a laugh. “Folks would drive by and look over like, ‘what the heck are you doing now?’”

After that initial success, the Ackermans continued using soil health practices and working with Extension. In 2019 they partnered on a new case study for Farmmaps. That year, they also had their farm’s best yield on record. Today, Jerry and Nancy use a blend of no-till, strip-till, diversified rotation and cover crops.

“While many early adopters of these practices have reported success, we were hearing from these farmers that the new terrain can often feel isolated,” Current said. “They wished they had peers to speak with about the process.”

Changing farming practices can be a risk, and farmers need a platform for exchanging their experiences. Farmers with case studies featured on Farmmaps agree to share their farm locations, and the platform provides directions on how to get there. This function encourages interested parties to visit their peers’ farms in person, creating opportunities to share information and build connections.

“Farmers understand each other—the constraints, the conditions and the issues they’re trying to address,” said Current. “One farmer telling another about the benefits of cover crops or soil health practices can be much more compelling than University staff delivering that message.”

The Ackermans have been integral in sharing that message, opening their doors and speaking to the community about what they’ve learned. Jerry feels it’s paying off, as other farmers in the region have taken up no-till and strip-till farming practices. “I don’t know if you want to call it peer pressure, but once one guy tries it and sees that it really works, pretty soon after that another guy tries it. Soon they’re all getting curious!”

A few years ago the Ackermans had a chance to share their experiences with a curious group of farmers from Hungary who visited their farm. Facilitated by the University, the group visited southwestern Minnesota to learn about no-till and cover crops. Jerry says both groups learned from the exchange. “In Hungary, they don’t have an Extension service or universities that study any of this,” he said. “If they want to learn it they have to read magazines, go on Google, and in this case, actually come to the United States.”

The Ackermans see Farmmaps’ digital network as an important next step for an evolving industry, and one they’re pleased to help cultivate. “The relationships we’ve developed [are] what I like most about all of this—meeting people,” said Jerry. “Nancy teases me that I never get anything done because I always have people stopping by. At the end of the day, it’s interesting to me and I’m having fun. That’s the main thing.”