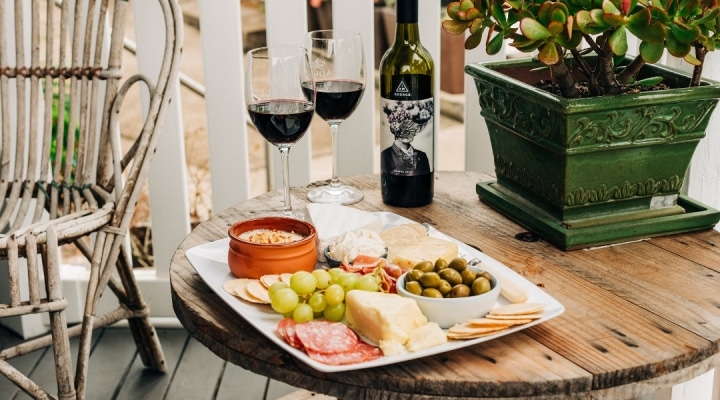 Tannins are polyphenolic compounds responsible for the bitterness and astringency of red wines. Wine testers have noticed that certain foods reduce these sensations, improving the flavor of a wine, but scientists aren't sure why. (Photo by Melissa Walker Horn on Unsplash)

WASHINGTON — Wine lovers recognize that a perfectly paired wine can make a delicious meal taste even better, but the reverse is also true: Certain foods can influence the flavors of wines. Now, researchers reporting in ACS’ Journal of Agricultural and Food Chemistry have explored how lipids — fatty molecules abundant in cheese, meats, vegetable oils and other foods — interact with grape tannins, masking the undesirable flavors of the wine compounds.

Tannins are polyphenolic compounds responsible for the bitterness and astringency of red wines. Wine testers have noticed that certain foods reduce these sensations, improving the flavor of a wine, but scientists aren’t sure why. Some studies have indicated that tannins interact with lipids at the molecular level. In foods, lipids are found as fat globules dispersed in liquids or solids. Julie Géan and colleagues wanted to investigate how tannins influence the size and stability of lipid droplets in an emulsion. They also wondered how the prior consumption of vegetable oils would impact the taste of tannins for human volunteers.

The researchers made an oil-in-water emulsion using olive oil, water and a phospholipid emulsifier. Then, they added a grape tannin, called catechin, and studied the lipids in the emulsion with various biophysical techniques. The team found that the tannin inserted into the layer of emulsifier that surrounded the oil droplets, causing larger droplets to form. In taste tests, volunteers indicated that consuming a spoonful of rapeseed, grapeseed or olive oil before tasting a tannin solution reduced the astringency of the compounds. Olive oil had the greatest effect, causing the tannins to be perceived as fruity instead of astringent. Combining the biophysical and sensory results, the researchers concluded that tannins can interact with oil droplets in the mouth, making them less available to bind to saliva proteins and cause astringency.