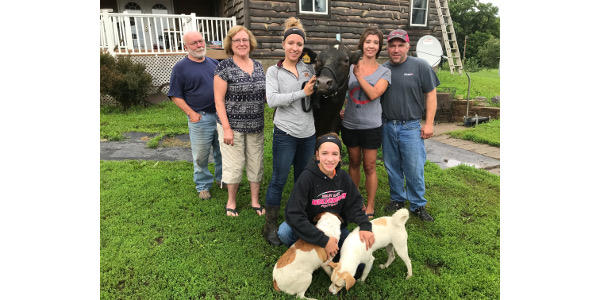 GAYLORD, Minn. — Congratulations to Dieball Dairy and the Dieball Family for being recognized as the 2018 Sibley County Farm Family of the Year! Dieball Dairy, which includes Karl and Rosemary Dieball and their children John and James and their faimiles, produce milk and cash crops near Green Isle, MN.

During World War II, the Dieball Family made their way across Europe as refugees and eventually came to the United States, starting Dieball Dairy when Karl was 6 years old. The current farm site was purchased in 1956 consisting of 125 acres and 6 dairy cows. The operation has grown over the years, and has been passed down to Karl and his brother in 1973, with Karl ultimately purchasing his brother’s share in 1981. They currently milk 150 cows and raise 170 youngstock, in addition to growing corn, soybeans and alfalfa.

Karl and Rosemary’s children, John and James, grew up working on the farm and have since gone to start families of their own. John lives on a farm south of the home place with his wife Jenny and 2 children, working off the farm in addition to a custom baling business. James lives and works on the farm with his wife Wendy and their 2 children and will continue running Dieball Dairy into future generations.

Representing agricultural achievement in diverse farming operations, over 80 families from throughout Minnesota are being honored as a 2018 Farm Family of the Year by the University of Minnesota.

The Dieball’s will be recognized in ceremonies beginning at 1:30 p.m., Thursday, Aug. 9th, at the annual Minnesota Farmfest on the Gilfillan Estate near Redwood Falls. They will also be recognized on Friday August 4th at the Sibley County Fair following the 4-H Dairy Show on Thursday, Aug. 2nd.

The annual Farm Family of the Year recipient is chosen locally by the Sibley County Extension Committee and is based on a candidate’s demonstrated commitment to enhancing and supporting agriculture and community involvement.

“The farm families receiving this year’s honors exemplify what makes Minnesota agriculture strong. They bring innovation, science and hard work to farming. They care greatly about the land and animals and delivering quality products to consumers worldwide,” said Bev Durgan, Dean of Extension. “The University of Minnesota takes great pride in honoring these families.”