Home / South Carolina / Device to extend peach tree life
A new user experience is coming! We'll be asking you to login to your Morning Ag Clips account March 1st to access these new features.
We can't wait to share them with you! Read more here. 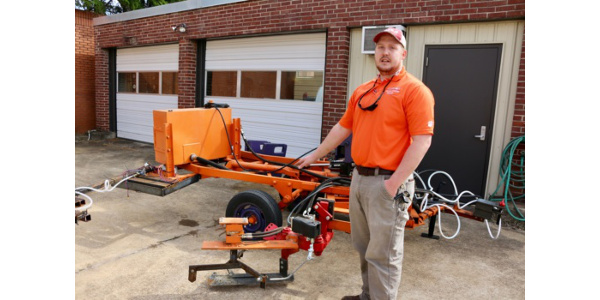 Their In-Row Orchard Bed Cultivator excavates soil from around peach trees planted in berms, reducing time and cost from an effective growing technique limited by its labor intensiveness.

“Right now, workers use a handheld air spade. That takes a long time and is a dirty job,” said Breland, an agricultural sciences student from Ruffin. “Our system uses a hydraulic tillage tool hooked to a three-point hitch.”

Armillaria is a soil-borne disease that feeds on dead roots before latching onto new, healthy roots and growing up the root to the bottom of the tree trunk, where it circles the root crown and infects other roots. The disease can shorten the life of a peach tree from around 15 years to four or five, a significant cost to South Carolina’s $60 million peach industry.

The fungus has perplexed scientists for nearly a century, as Armillaria is not susceptible to chemical or biological treatments, and no tree varieties have shown true resistance to it. The disease’s Achilles heel, however, is that it cannot grow in tree roots that are above ground.

Clemson peach researcher Guido Schnabel, a plant pathologist in the College of Agriculture, Forestry and Life Sciences, has developed a solution. Per his method, trees are planted shallow on soil berms 12 to 15 inches high and 3 feet wide. Two years after planting, the soil around the roots may partially erode or must be removed, exposing several inches of the tree’s root crown. Armillaria, then, cannot reach the root crown. Schnabel has proven the method effective in six years of testing in heavily infested soil at Clemson’s Musser Fruit Research Center in Seneca.

Several South Carolina peach growers now plant trees on berms but allow the soil to erode from the base of the tree rather than excavating with an air spade, said Clemson pomologist and peach expert Juan Carlos Melgar. The benefit would be greater, however, if they excavated the berms completely rather than let the soil partially erode, he said.

Breland began developing the cultivator as part of a senior project with classmates. He continues to test and refine the machine during his graduate studies with funding from the South Carolina Peach Council.

The equipment is mounted to a repurposed pull-behind cultivator frame. It includes a three-pronged, hydraulically driven rotary tillage head that excavates soil between trees and a feeler sensor that triggers a cylinder to remove the tillage head to protect trees from damage. The device is powered with the tractor’s PTO (power take off) shaft.

“Tractors typically used in orchard operations are often old or don’t have enough hydraulic flow capacity, but most of them have the PTO shaft, so this design makes the unit more versatile,” said Koc, assistant professor of agricultural mechanization and business.

“That way any age tractor can hook right up to it,” Breland said.

Breland is upfitting the device with a reservoir tank and five nozzles that would use high-pressure water to excavate soil around the tree’s trunk. Using water would be more affordable than compressed air, he said, and offers the potential benefit of being used in tandem with fungicide applications, further reducing time and cost.