Home » Device sniffs out the "smell-fingerprints" of pestered plants 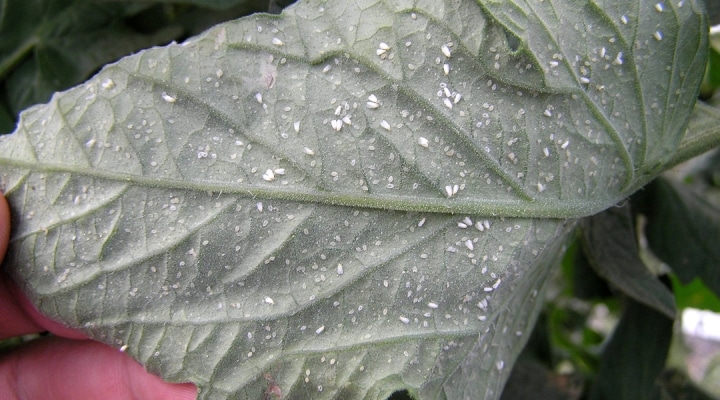 WASHINGTON — A team of Agricultural Research Service (ARS) and university scientists has developed an electronic nose to sniff out whitefly infestations of tomato plants.

The “E-Nose” works by detecting a specific cocktail of chemicals, called volatile organic compounds (VOCs), that tomato plants release into the air when attacked by whiteflies.  In nature, these chemicals put other plants on high alert. Scientists are hoping the E-nose will also warn growers so they can fine-tune their use of whitefly-killing insecticides, biocontrol agents like parasitic wasps or other measures.

According to Heping Zhu, an agricultural engineer with the ARS Application Technology Research Unit in Wooster, Ohio, who co-developed the E-nose with collaborators at The Ohio State and University of Tennessee-Knoxville, whiteflies are top insect pests of U.S. fresh-market tomatoes, which were valued at $721 million in 2020.

Left unchecked, adult whiteflies and their immature nymphs probe the undersides of tomato plant leaves for sap, causing them to turn yellow, curl or drop off. Whitefly feeding can also cause uneven ripening of fruit and transmit viral diseases that weaken the plants further.

Whitefly monitoring typically involves checking for a threshold number of the pests per leaf on a sampling of plants or captured in sticky traps—both a time-consuming process.

But, scientists wondered, what if the plants could alert the growers themselves—and in real-time?

Towards that end, the researchers designed a prototype E-nose device about the size of a shoebox that can operate in the greenhouse. According to Zhu, the device mimics the mammalian sense of smell and brain’s ability to recognize certain odors. But instead of a nasal passage, receptor cells and an olfactory bulb, the E-nose uses gas sensors, data acquisition modules and other components.

A key feature of the E-nose is a nerve-like circuitry board that helps convert VOC samples from the air into digital signals. These signals in turn are transmitted to the system’s “brain,” namely, a mathematical algorithm programmed to recognize specific types and concentrations—or “smell-fingerprints”—of VOCs that tomato plants give off when attacked.

In greenhouse tests, the E-nose displayed the VOC fingerprints of such plants as different lines with different colors that rose sharply and steadily to the right of an LED screen. Moreover, the system distinguished the smell-fingerprints of whitefly-infested tomato plants from un-infested ones, as well as plants whose leaves were punctured with pins for comparison.

With additional testing and development, the E-nose could give greenhouse growers another monitoring tool to use in deciding where, when, and how best to tamp down whitefly infestations before they reach economically damaging levels. Besides whiteflies, the E-nose also successfully sniffed out tomato-infesting aphids and insect pests of other greenhouse crops.

“The future E-nose system can be designed as a hand-held device for growers to take samples from individual plants,” Zhu said. “It can also be designed as a computer-controlled cloud networking system which consists of multiple smart sensors placed at different locations in the greenhouse, so the computer can automatically collect samples and monitor infestations 24 hours a day.”

Details of the team’s findings were published in the October 2021 issue of Chemosensors and in the August 2019 issue of Sensors.