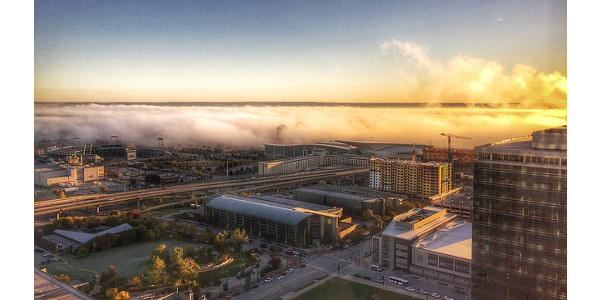 OMAHA, Neb. (AP) — They call it “the farm” — and when Robert and Sharon Bruning bought it 40 years ago, the blue spruce that now towers over the old farmhouse at 162nd and Fort Streets stood just a few feet tall.

The couple’s small daughters, now parents themselves, squealed in horror upon discovering hog carcasses left by previous owners. Perhaps most notable back then, compared with today, was the absence of neighbors — at least the human kind.

But eventually came the city of Omaha, pushing farther northwest toward the 5-acre site still classified today as agricultural.

Homes, some with swimming pools and fancy decking, have sprouted in all directions. Traffic today streams past the driveway winding onto the Bruning property — a sort of rural throwback marked by antique signs, weather vanes and a 105-year-old red barn surrounded by nine tidy structures.

Along with population, though, has come attention — including a neighbor’s complaint about noise and potential hazards on the grounds.

Now the farm, which has evolved into mostly rental space for a landscaper, car fanciers and storage-seekers, is at risk. Omaha officials want the operations shut down, citing concerns with permits, zoning and life safety.

The Omaha World-Herald reports that the Brunings, who don’t reside there but often visit and use the barn for hobbies, are fighting back. They say they’re feeling forced to surrender a safe place with nostalgic and sentimental value, let alone retirement income.

The case has landed in court, where the fate of the embattled property ultimately may be decided. Public records, meanwhile, help piece together the ups and downs of longtime property owners who had an early foothold in a frontier area that’s now in the path of progress.

“It’s kind of our baby,” Sharon Bruning said. “We ran our business out of here. It’s the one piece we just never wanted to sell.”

Had the area around it not become as popular for home construction, the Brunings might have escaped (at least for a while) that city notice to cease operations.

But the neighbor complaint in early 2015 triggered a visit and a lengthy investigation by Omaha planning officials into how the site is used. (While not in the city limits, the Bruning place has been within a 3-mile area subject to Omaha rules since the couple bought it.)

According to transcripts from the Zoning Board of Appeals, administrator Mike Carter said new businesses and modifications made to the farm over the years might be suited for an area zoned as commercial or industrial — but not an agricultural district.

Even though the Brunings vowed to change the tenant mix and fix various problems, city administrators and the zoning board balked at granting waivers allowing the operation to continue. They cited additional safety worries related to fire, plumbing and traffic flow.

Meeting transcripts show the Brunings’ attorney increasingly frustrated with what they saw as the city moving goal posts. At one point, lawyer Jerry Slusky, who handled the case during city proceedings, suggested the board members lacked backbone. He said state statute calls upon the zoning board to make reasonable code adjustments in situations that don’t “fit perfect” in the box and that create hardship.

“Instead of having some spine, if you will, and saying, ‘OK, this is our job, give us the information, we’re going to make a decision,’ every time we turn around we’re in another meeting, we’re backing up, we’re bending over, we’re spending money.”

Just when a compromise seemed close, Slusky said, “Poof, the rug gets pulled out.”

As for hardship, the Brunings contend that they’d lose big by selling the farm for residential development — which is the use encouraged by the city’s current master plan. The couple, now retired from seed-planting and real estate brokerage businesses, figure a homebuilder might pay about $200,000 — that’s less than the nearly $1.8 million the property is valued at this year for tax purposes by the Douglas County assessor. They’d also lose future rental income.

The Brunings said they were told a dog kennel would be an allowable use of their grounds, but they doubt neighbors would like that. They also doubt they’d get necessary environmental approvals for something like a hog operation.

For their part, numerous neighbors wrote letters or testified in support of the current setup of eight stand-alone buildings, the barn and century-old farmhouse that’s been renovated and is rented.

Heidi Hoke, a Stone Ridge resident, told the couple: “It’s not as if I bought my home and then you appeared. If I had any issues with your location, I would have looked elsewhere.”

Said Tina Grubaugh, “I am actually thankful to have it in my view.”

Larry Windgate likes the giant flag at the property’s entrance, next to the eagle statue and antique Standard oil sign.

“It’s just kind of a novelty within the neighborhood,” Terri Sautter said. A “neat landmark.”

Omaha City Council member Aimee Melton made a debut appearance before the zoning board to relay support for what she called a “unique property and unique circumstances.”

She said she didn’t think it would set a precedent to back the Brunings, “based on the conditions and concessions the property owner is willing to make.”

At least one neighbor, however, continued to express alarm over noise and what he described as manufacturing-type activities. In a letter to city planners, Thomas Neal said he fretted about what danger might lurk in a tank he described as “the size of a small house.”

He said he had “serious concerns” about the impact a boiler business and lawn care commercial services could have on homeowner insurance rates.

Zoning board member Subby Anzaldo aligned with the complainant, but called the predicament one of the most complex of all he faced during his political career spanning four decades.

Said board member Jeremy Aspen: “They’re human, they didn’t do anything wrong. It’s just the circumstances that … don’t bode well for them.”

In the end, Jason Lanoha, who also voted with the 4-1 majority, said he couldn’t shake lingering life safety concerns, including hurdles firefighters could encounter reaching the site now surrounded by new houses and a golf course.

Following that June 2017 board decision, the Brunings appealed in Douglas County District Court and lost. Judge W. Russell Bowie ruled this past February that the Brunings “unilaterally altered the permissible use of the property by leasing portions of the buildings to others — essentially a commercial use.”

Next, the case is to go before the Nebraska Court of Appeals.

While the Brunings sold their farming operation in 1991, and seeding companies in 2004, they say their tenants have used the 162nd and Fort site largely for the same purposes as they had: seeding and storage.

Back in the 1980s, they say, the farm was even noisier with their grain dryers, silos, mowers and erosion control machinery.

As residential development approached, they said, they spent a lot sprucing up the property — and even helped broker deals between fellow farmers and developers that led to transformation of other area green fields into housing subdivisions.

They say their contractors were told that new warehouse-like structures didn’t need building permits because they were in an agricultural district. But Jay Davis, head of city permits and inspections, noted in a memo a “key point” — that exemptions don’t apply after the original farm stopped the practice of farming.

He said a permit review would have pointed out standards for what had become a more urban area.

No one denies the area’s growth. Consider this:

Between 1980 and 2010, the number of homes in the census tract that encompasses the farm and City of Bennington more than quadrupled.

Population in that area grew at nearly the same pace, according to data compiled by the University of Nebraska at Omaha’s Center for Public Affairs Research.

Today, MarketGraphics of Nebraska, which tracks new construction trends, calls that northwest area in and around Bennington one of the state’s hottest for homebuilding.

A sign of more growth ahead, Pat Regan of Investors Realty said he has tracked roughly 1,700 new home lots being prepared in an area north of West Maple Road and west of 156th Street.

“Three areas of Omaha are really pushing forward with growth,” Regan said. “Northwest Omaha is one, Papillion and southwest Omaha are the others.”

Development to the northwest, he and others said, is buoyed by the new Flanagan Lake near 168th and Fort Streets and proposed new schools including those at 156th and Ida Streets and at 180th Street and West Maple Road.

Longtime homebuilder Jerry Torczon said he was shocked during a recent drive around the dam site at the amount of grading going on.

“It’s mind-boggling how much dirt was turned over recently for single-family housing,” he said.

The Brunings at their peak farmed about 2,000 acres of corn and soybeans, and sold or developed chunks for what became northwest subdivisions such as Pine Creek and Bennington Park.

Just this month, they broke ground on a 10,000-square-foot commercial center on land they own in Bennington, next to two retail strips they developed in 1995 and 2000. A seven-acre plot of the family’s remains poised for a nearby apartment-building.

Sharon Bruning chuckled at how far Bennington has come, noting how unfamiliar many were when the Brunings developed the first phase of Bennington Park in the early 1990s.

“So many people would say, ‘Where’s Bennington?,’ ” she said. “I think everybody knows now.”

Both in their 70s, the Brunings say it’s time to slow down on business, and have turned over most new ventures to one of their two daughters.

Married 50 years with four grandchildren — and a street named after them in Bennington — the couple considers themselves blessed.

Robert said he appreciates success especially after growing up without a phone or indoor toilet on a farm near 162nd and Blondo Streets, not too far from the embattled property.

Today the couple lives near Cunningham Lake and are avid collectors. He loves Elvis; she raves over antique cupolas and has displayed her finds at the farm, where the couple says they spend about $50,000 a year to maintain the campus.

They’re prepared to keep battling, and the Omaha attorney now representing them in trial phases, Diana Vogt, said she’s also about to file a federal lawsuit alleging violation of the couple’s constitutional rights. Vogt contends the Brunings are being treated differently than other similarly-situated people.

The Brunings have compiled a list of other local agricultural zoned sites with ongoing business activities they say evolved in ways similar to the Fort Street property.

“We’ve had that ground all along, spent 40 years building it up,” Sharon said. “We’re feeling like we’re getting run out.”