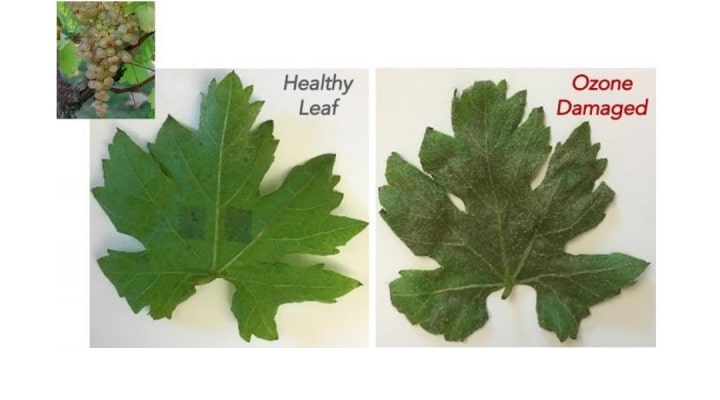 Vapor-depositing conducting polymer "tattoos" on plant leaves can allow growers to accurately detect and measure such ozone damage, even at low exposure levels. UMass Amherst materials chemists say their conducting polymer film, PEDOT, is just 1 micron thick so it lets sunlight in and does not hurt leaves. (UMass Amherst/Andrew lab)

AMHERST, Mass. — Farmers and fruit growers are reporting that climate change is leading to increased ozone concentrations on the soil surface in their fields and orchards – an exposure that can cause irreversible plant damage, reduce crop yields and threaten the food supply, say materials chemists led by Trisha Andrew at the University of Massachusetts Amherst.

Writing in Science Advances, co-first authors Jae Joon Kim and Ruolan Fan show that the Andrew lab’s method of vapor-depositing conducting polymer “tattoos” on plant leaves can allow growers to accurately detect and measure such ozone damage, even at low exposure levels. Their resilient polymer tattoos placed on the leaves allow for “frequent and long-term monitoring of cellular ozone damage in economically important crops such as grapes and apples,” Andrew says.

They write, “We selected grapes (Vitis vinifera L.) as our model plant because the fruit yield and fruit quality of grapevines decrease significantly upon exposure to ground level ozone, leading to significant economic losses.” Ground-level ozone can be produced by the interaction between the nitrates in fertilizer and the sun, for example.

UMass Amherst viniculturist Elsa Petit, who advised the chemistry team, says the sensor tattoo could be especially useful to the grape industry. “With climate change, ozone will increase and this new sensor might be extremely useful to help farmers act before the damage is recognizable by eye,” she says. Ground-level ozone can be mitigated by early detection and treating the soil surface with charcoal or zeolite powders.

As Andrew explains, her lab, funded by the National Science Foundation, adapted the electrode vapor-deposition method they had developed earlier to coat fabrics for medical sensing devices for a new use – on living plants. The conducting polymer film, poly(3,4-ethylenedioxytiophene), PEDOT, is just 1 micron thick so it lets sunlight in and does not hurt leaves. Non-metal, carbon-based polymers that act as conducting electrodes are increasingly used in soft materials design since they were invented in the 1970s, she adds.

“Ours acts like a temporary tattoo on a human,” Andrew says. “It doesn’t wash away and the polymer’s electrical properties don’t degrade, even over a long time. We have some tattooed plants in a greenhouse on campus and a year later they are still growing fine, putting out roots and leaves as normal.”

To test for early ozone damage, she and colleagues use a hand-held impedance spectrometer adapted from human medical practice. When it touches the electrode tattoo, a read-out reports the electrical resistance vs frequency relationship. This voltage value changes in the presence of various factors, including oxidative damage from ozone.

Andrew says, “You get a wave-form image; a software program fits the wave so we can extract certain tissue parameters. We can recognize patterns for different kinds of damage. It’s consistent and remarkably accurate. If you use it on the same plant over a year, as long as the plant is healthy the signal doesn’t really change over that time.”

“The problem scientifically is that visual ozone damage looks exactly the same as if you watered the plant too little or it got too much sun. This project became intellectually interesting to us when we looked at the ozone signature of our read-outs and it was very different from drought or UV damage. Ozone produces a unique change in the high-frequency electrical impedance and phase signals of leaves.”

The scientists hope their invention could be used by farmers and fruit growers who could place a few “reporter plants” among crops to periodically monitor soil ozone levels. “It gives you a picture of what is going on in your soil,” Andrew suggests. “You can be alerted if the fertilizer level is wrong, for example. This can happen, especially with food crops that need a lot of sun and fertilizer to produce, like melons, grapes and orchard fruits. Some plants are very sensitive to it.”