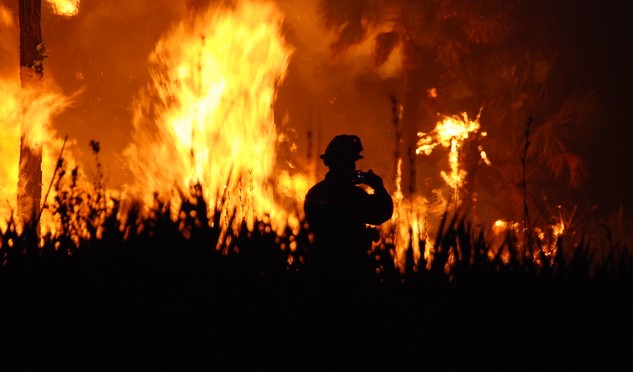 HEALDSBURG, Calif. (AP) — If you’re worried that wildfires might have created shortages of Northern California’s 2019 cabernet sauvignon, or even just imparted it with an undesirable smoky flavor, you can relax. The wine is just fine. For now.

Despite a late October blaze that raged through one of the world’s best-known wine-growing regions. forcing evacuations in two mid-sized towns, wine production in Sonoma County escaped largely unscathed.

Limerick Lane Wines, for instance, avoided serious damage despite flames that licked at two sides of its property in the Russian River Valley just south of Healdsburg. Limerick’s grapes were already harvested, crushed and stored in tanks and barrels. The winery’s sealed cellar prevented smoke damage to its inventory, said owner Jake Bilbro, although its tasting room now has an acrid smell.

“I have to thank the people who planted our vineyards and built our house 100 years ago,” Bilbro said. “Our buildings are all surrounded by vineyards, and vineyards are excellent fire breaks.”

Overall, vintners estimate that the region lost only about five percent of its harvest to fire and smoke — not a perfect outcome, but better than in 2017, when wildfire struck with only about 90% of the harvest in. The remaining grapes weren’t all lost, but that year’s vintages were rumored to have a “smoky” taste, and winemakers were taking no chances this year.

Many in Sonoma, a sprawling county larger than Rhode Island located about an hour north of San Francisco, say they’re hoping that fires don’t become the new normal. But with the smell of smoke lingers in the air and the charred hills serving as a reminder, they’re also making plans in case they do.

Fire season isn’t over yet, of course, and the now largely contained Kincade fire did incinerate the historic Soda Rock Winery, although most vineyards sustained no damage and lost no production. But the region has suffered a precipitous drop in fall tourism, which could undermine the economic health of its wineries and hospitality industry alike.

Bret Munselle lost about half of the young vines he had planted just two months before when a fire raged through the upper part of his ranch at Munselle Vineyards in Alexander Valley, between Healdsburg and Geyserville. The drainage below the plants was also damaged, and will probably cost $150,000 to repair, he said.

It could have been much worse if mature vineyards were more appealing to fire. Water-rich vines and grapes planted in plowed rows don’t offer them much fuel, he said.

“My family has lived on this property for 130 years,” Munselle said. “We’ve never seen it burn from the tops of mountains to the valley floor.”

Oddly enough, those same effects can help protect the grape crop by accelerating ripening of the fruit and reducing the chance that unexpectedly early rains might damage it.

Wine researchers have suggested vineyards might need to adjust harvest times, evaluate what they plant, even possibly move to cooler areas over time.

Few grape growers are dramatically changing their practices yet. No one is talking about closing up shop or moving elsewhere. But winemakers are tinkering anyway — and everyone is buying backup generators.

Clay Mauritson of Mauritson Wines said he and his family are experimenting with different pruning methods to increase shade on the plants, although they don’t see any need to shift to new growing areas.

“We don’t want to be too dramatic or reactionary,” he said. “We are going to take baby steps to make sure we’re prepared for what comes down.”

Tourism, which is usually booming amid the fall colors and mild temperatures, has taken a serious blow. Evacuations of nearby Healdsburg and Windsor, along with planned blackouts by the region’s utility, PG&E — plus, the widespread misperception that the vineyards themselves burned — led to a rash of cancellations for hotel, restaurant and tasting-room reservations.

Joe Bartolomei, owner of the upscale boutique hotel Farmhouse Inn in Forestville, said he would normally be sold out this time of year. But on Nov. 1, his inn had only two of 25 rooms filled. He’s trying to get the message out that the county businesses are intact and open for visitors.

But, he said, “it’s going to be a slow, gradual education.”

So the tourism bureau now plans to promote wine country as a spring destination rather than fall, and is devoting the bulk of its $750,000 advertising budget to that end. That means convincing visitors to come celebrate “bud break,” when green shoots make the vineyards colorful, rather than the harvest itself.

But to boost tourism numbers to a level she’d like, Vecchio says she would really need roughly ten times the budget.

The good news, Diffenbaugh said, is that people have a long history of figuring out how to thrive in all kinds of environments.

“Humans are really good at dealing with a variety of different conditions,” he said. “What climate change is doing is changing which conditions occur where.”

What we can learn from the Australian bushfires
January 14, 2020