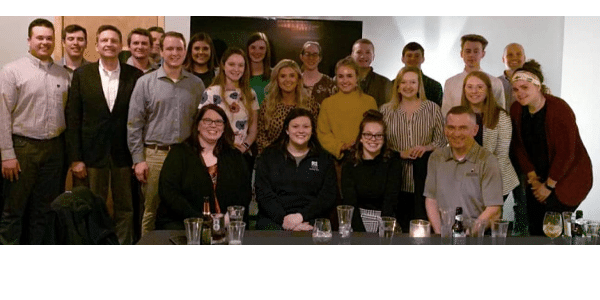 The Mizzou National Agri-Marketing Association (NAMA) team recently had several members earn awards and scholarships during the 2020 NAMA Student Marketing Competition and Conference. This photo was taken in early March while the Mizzou NAMA team pitched its product to the MoKan NAMA Chapter and networked with the K-State NAMA team. (Photo courtesy of the Mizzou NAMA team)

COLUMBIA, Mo. — While the in-person version of the 2020 National Agri-Marketing Association (NAMA) Student Marketing Competition and Conference was cancelled, several members of the Mizzou NAMA team still earned awards and scholarships via an online version in late spring.

The Mizzou NAMA team was one of six teams to win recognition for its written executive summary for the Student Executive Summary Competition. Within that competition, students develop a business proposition with a service description that includes a strategy statement, as well as goals, objectives and assumptions. The team conducts a market analysis, while looking at trends and potential. They also put together a competitive analysis and action plan.

“Although this year’s competition and conference looked a little bit different, I was incredibly proud of our team,” said Annette Kendall, director for the Center for Entrepreneurship and Innovation, assistant teaching professor in the Trulaske College of Business and advisor for the Mizzou NAMA team. “It’s always rewarding to see the students’ hard work pay off in such an important way. I’m really proud of what they accomplished.”

Three University of Missouri College of Agriculture, Food and Natural Resources students earned scholarships during the conference as well.

Abby Schmidt, who is majoring in agribusiness management and plant sciences, received the Successful Farming/Fergie Ferguson Scholarship. That scholarship is given to one junior each year to recognize personal achievement, leadership abilities in collegiate activities and NAMA involvement.

Allie Lock and Regan Ragsdale, both majoring in agribusiness management, earned the NAMA Foundation Scholarship. The scholarship recognizes those who demonstrate personal achievement and leadership abilities in collegiate activities.

“Abby, Allie and Regan are incredibly deserving of these scholarships,” Kendall said. “They are great leaders within our program and this is an important recognition for them.”

Nematode has potential to reduce cotton yields by 50%