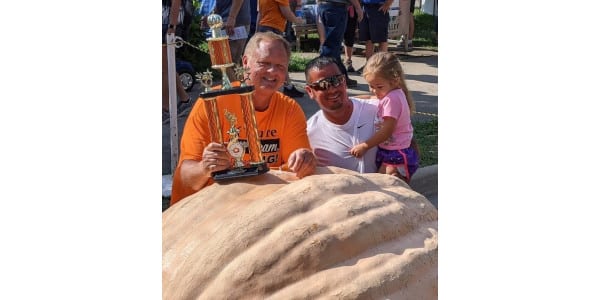 The growers, Don Young and his son-in-law Tommy Rhodes, of Des Moines, received a $1,850 cash award.

David Miller, of Riverside, claimed second place and $800 with a 716-pound pumpkin, and a 637-pound entry by Paul Harrington, of Blakesburg, earned third place and $450.

Young and Rhodes are no strangers to growing giant pumpkins. The duo won the state contest in 2019 and had the world record pumpkin in 2007 and in 2009. In 2007, their three pumpkins had a combined world record weight of 4,613 pounds.

Young has been growing and breeding “Atlantic Giants” for about 20 years, and seeds from his winning pumpkins have been grown around the country.

“It’s a lot of effort and work but everyone can do this with a little bit of common gardening skills,” Young said.

Experience has been the key to Young’s success, especially in Iowa, where the climate can sometimes limit the growing season, especially in a hot year like 2021. He now starts his pumpkins in a greenhouse, in February or March, and cares for them daily.

Because the state fair falls in August, he has to get an early start, and the early harvest often means not having as big of a pumpkin in the fall.

But 915-pounds in August is good enough for first place, and Young said he was pleased with this year’s results.