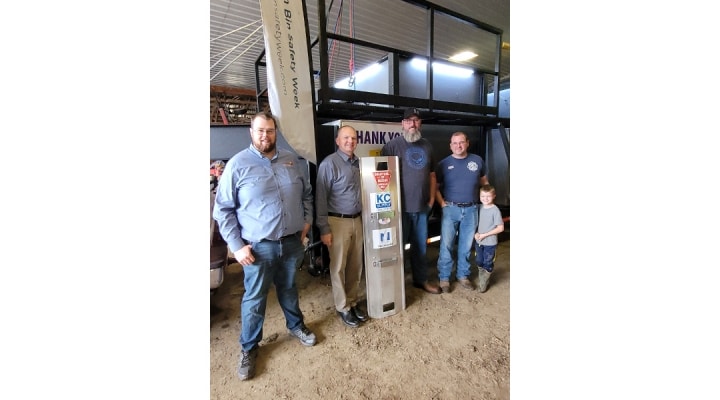 AUBURN, N.Y. — Announced as the winning recipient from New York State of Nationwide’s Nominate Your Fire Department Contest of 2020, DeRuyter Fire Department was awarded and able to take delivery of a life-saving grain rescue tube after COVID restrictions were lifted.  In addition to the rescue tube, they received a grain rescue auger along with the training necessary to properly use the equipment. Total value of the award is close to $5,000.

On June 3, the first responders received four hours of training from Nominate Your Fire Department Contest partner, National Education Center for Agricultural Safety (NECAS) based out of Peosta, IA.  Arriving on site, NECAS brought with them a trailer housing a state-of-the-art grain entrapment simulator that holds 100 bushels of grain for training purposes.  The session provided information about grain bin design and structure, as well as the four most common ways that people become entrapped in grain bins.  The hands-on portion of the training covered lockout/tagout procedures and extrication of a fully engulfed and a partially engulfed victim.

Every year, thousands of farmers and commercial grain handlers risk their lives by entering grain bins to remove clumped or rotted grain.  Nationwide has been dedicated to educating those entering grain bins about the hazards involved and the importance of implementing safe entry procedures.  Since 2014, when Nationwide first initiated its grain bin safety advocacy campaign, 152 fire departments in 30 states have been awarded grain bin rescue tubes and training.  This Nationwide program is supported by financial partners throughout the United States and New York Farm Bureau is proud to be a participating financial partner.