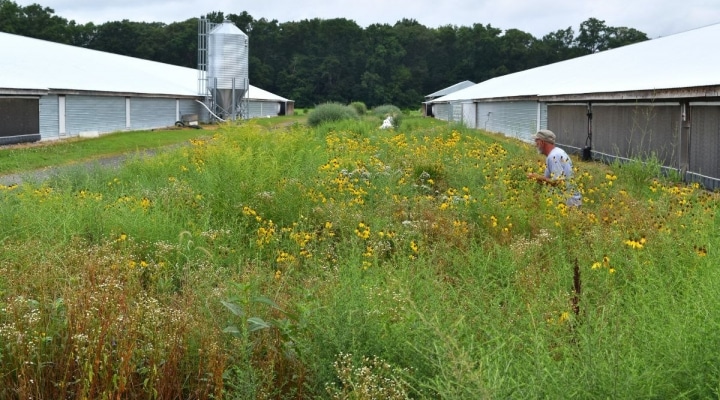 A pollinator-friendly vegetative buffer in between chicken houses on a Delmarva family-owned chicken farm helps capture dust, noise, odor and nutrients. Farmers in the Chesapeake Bay watershed have reduced their nutrient inputs to the Bay by 23 percent in the past 25 years. (photo provided)

When your goal is to cripple the business models of family-owned chicken farms in the name of activism, you have to be willing to make some outlandish claims, as this report does. But even this report, in its fine print, documents Maryland chicken farmers’ overwhelming compliance with environmental regulations. The report shows that only 6 percent of chicken farms recorded possible overapplication of litter to farm fields in annual implementation reports (AIRs), and that the vast majority of Maryland poultry farms are in compliance with their nutrient management plans.

This group and its allies want states to bleed farmers dry with punitive fines that force families to leave farming behind. That outcome would lead to even more strain on the food supply chain we all depend on. Fortunately, Maryland takes a different approach, working with farmers to help them make course corrections. The report grudgingly notes the success of this approach, documenting that ‘the number of sites considered by MDE to have “significant violations” – meaning violations that are chronic or threaten significant impact to the environment — has declined’ (page 19 of the report).

Scientists monitoring the Chesapeake Bay have documented that farmers have reduced their nutrient inputs to the Bay by 23 percent in the past 25 years, while developed areas in the Bay’s watershed have increased their pollution loads by 45 percent. There’s still work to be done by farmers and everyone else who lives in the Bay’s watershed, but reports like this one are simply attempts to distract from the real, tangible progress farmers have made in protecting water quality.