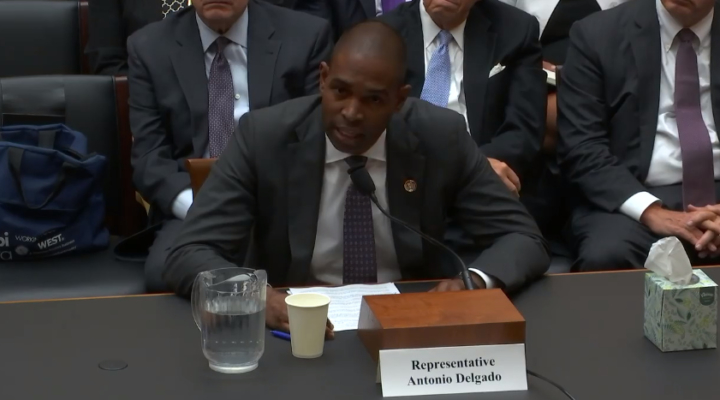 WASHINGTON — U.S. Representative Antonio Delgado (NY-19) testified before the House Committee on the Judiciary’s Subcommittee on Antitrust, Commercial and Administrative Law during a hearing on Oversight of Bankruptcy Law about his bipartisan legislation to assist family farmers during this down farm economy. Rep. Delgado urged consideration of H.R.2336, the Family Farmer Relief Act, his legislation that would ease the process of reorganizing debt through Chapter 12 bankruptcy rules. Below is a video of his testimony and his remarks as prepared for delivery:

“Good morning, thank you all for having me. I appreciate you holding this hearing to make sure our nation’s bankruptcy laws reflect today’s economy and represent the experiences of our nation’s farmers.

“I’m proud to represent New York’s 19th Congressional District, which stretches nearly 8,000 square miles, is made up of 11 counties, and includes the beautiful Hudson Valley and Catskill Mountains. My district is the eighth most rural in the country, and the third most rural represented by a Democrat.  It is home to more than 5,000 farms and 8,000 farm operators.

“Today, I am here to speak on behalf of family farmers across my district who, along with farmers across the country, are facing alarming rates of foreclosure during this down farm economy.

“I would like to take this opportunity to articulate for the committee exactly what a down farm economy looks like:

“In addition, at the 2018 Agricultural Economic and Outlook Foreign Trade Forum, the USDA Chief Economist said, ‘net farm income is expected to remain flat over the next ten years, and when accounting for inflation, to fall in real terms.’

“This is a down farm economy—and this story is not unique to NY-19, or Upstate New York. This is an urgent, national issue for our farmers.

“This farm economy is exacerbated by an outdated filing cap that leaves farmers without options to restructure or repay their debt.

“This is why I introduced the Family Farmer Relief Act, along with the Ranking Member, Mr. Sensenbrenner and our colleagues on both sides of the aisle. H.R.2336 is a bipartisan step to give these family farmers long overdue relief through Chapter 12.

“Chapter 12 debt relief was in fact originally written for family farmers experiencing a down farm economy. The rules, as written, allow for a seasonal repayment, as farmer’s incomes shift with the seasons.

“Our legislation modifies Chapter 12 bankruptcy rules to increase the debt cap for eligibility from $3,237,000 to $10,000,000. These changes reflect the increase in land values, as well as the growth over time in the average size of U.S. farming operations. These charges will provide farmers additional options to manage the current farm economy. Lifting the cap will allow farmers to retain assets and continue farm operation.

“The Family Farmer Relief Act, which also has a bipartisan Senate counterpart, has the support of important voices in the farming community including the American Farm Bureau Federation and the National Farmers Union.

“Upon introduction, the American Farm Bureau said this legislation, ‘will help to align bankruptcy law with the scale and credit needs of U.S. agriculture.’

“The National Farmers Union also joined in endorsing the Family Farmer Relief Act saying that it, ‘will help more family farmers avoid liquidation or foreclosure, allowing them to stay in operation.’

“This legislation aims to do just that: keep farmers operational.

“Allowing farmers increased flexibility is critical to the health and wellness of our family farmers and the Upstate economy at large. I encourage the committee to mark up this legislation and bring it to the House Floor, so we can give our farmers and growers the flexibility they need to continue operations.

“Thank you all again for the opportunity to testify today to address how we can aid our farmers in this difficult farm economy. I look forward to working with you all to advance the Family Farmer Relief Act.”

Siri: How do I care for a goat with scours?