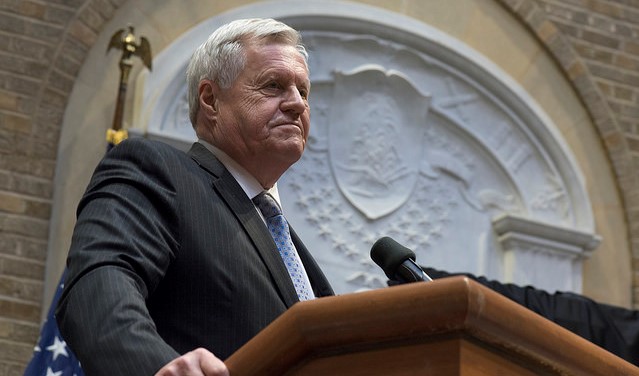 “Brazil and Argentina have been both strategic allies in Western Hemisphere politics and strong competitors in ag markets,” said House Agriculture Committee Chairman Collin Peterson. “I wanted to see firsthand the state of our relationship with these countries, as well as the state of their agriculture industries to determine what openings the Administration’s trade policy has created for our competition.” (U.S. Department of Agriculture, Public Domain)

WASHINGTON — House Agriculture Committee Chairman Collin Peterson of Minnesota and a bipartisan delegation of Members of Congress met last week with President Jair Bolsonaro of Brazil and President Mauricio Macri of Argentina as part of a trip to review the agricultural trading relationships between the United States and those nations, as well as what downstream effects of changes in U.S. trade policy is having on competing producers in South America. The delegation also met with U.S. armed forces personnel stationed at Joint Task Force Bravo and Soto Cano Air Force Base in Honduras.

“Brazil and Argentina have been both strategic allies in Western Hemisphere politics and strong competitors in ag markets,” said Peterson. “I wanted to see firsthand the state of our relationship with these countries, as well as the state of their agriculture industries to determine what openings the Administration’s trade policy has created for our competition.”

In Brazil, the delegation toured corn, cotton, and soybean producing regions, and reviewed the infrastructure capacity of industry to meet export demand.

“We were fortunate to see a lot of Brazilian agriculture and one thing that stood out was the quality of the crop there,” said Peterson. “These guys are double cropping corn and cotton and getting fantastic yield on both, with a good-looking crop. They’ve got in many cases better access to new traits and new technologies than our guys, and they’re right on our heels. Right now it costs the Brazilians as much as twice what it costs us to ship soybeans to China, so we’ve still got an advantage, but we’ve got to invest in our own infrastructure—things like locks and dams and ports—if we want to stay ahead of them.”

During meetings with President Bolsonaro, the delegation learned that the country is looking to attract billions in private investment to improve the country’s infrastructure, and in particular the capacity of its agricultural supply chain.

“President Bolsonaro is actively looking to close that gap, and there are plenty of investors in places that demand the products that our countries produce who are willing to step in and provide the funding to do it,” Peterson said.

In Argentina, the delegation spoke with President Macri, as well as members of the biodiesel processing and soybean industries, on the landscape facing Argentinian agriculture.

“We also heard a lot about biodiesel in Argentina,” said Peterson.“The folks in Argentina face a strange situation: because of the government’s tax structure, at times it has been cheaper for them to produce and export biodiesel to the U.S. than it is to sell it there in Argentina,” Peterson said. “In 2018, our Commerce Department put anti-dumping duties on Argentine biodiesel which lowered how much they sold to the U.S. Then, their government raised their export tax from 8 to 15 percent to match the 15 percent export tax on whole soybeans. What’s helping to relieve the pressure is that the export taxes on whole soybeans and soybean meal are now even so they are exporting more beans to the Chinese. What’s unfortunate for our farmers is that some of those sales are beans the Chinese used to buy from us.”

“Overall, my takeaway from the trip is that as competitive as the South Americans are, they will only become stronger with time, and our missteps on trade policy are only helping them along in that effort,” added Peterson. “It’s only a matter of time before investments to improve infrastructure cut in to our competitive advantage, and the Chinese are happy to buy everything the South Americans can grow until we figure our trade mess out. That doesn’t fill me with a lot of confidence.”