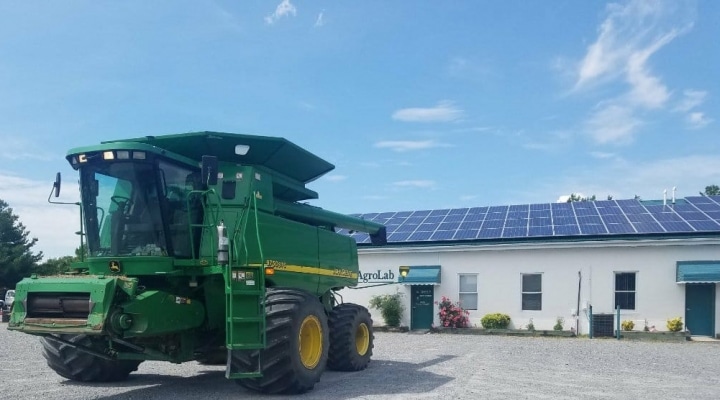 Some farmers are giving back in more ways than one with a little help from Delaware’s sun, benefiting goals set forth in Senate Bill 33 signed by Governor John Carney Wednesday, Feb. 10 this year. (photo provided)

CAMDEN, Del . — Some farmers are giving back in more ways than one with a little help from Delaware’s sun, benefiting goals set forth in Senate Bill 33 signed by Governor John Carney Wednesday, Feb. 10 this year.

“Delaware is the country’s lowest-lying state, and climate change is already having a very real impact,” Gov. Carney said. “This legislation will help accelerate Delaware’s transition to renewable sources of energy, which is good for our economy and our environment, and I’m pleased to sign it into law.”
Solar panels are just one way Delaware farmers are improving the outcome of goals such as those discussed in Senate Bill 33.

According to Delaware Farm Bureau member Katharine Parry of Hartly, solar panels have not only enhanced her family’s poultry farming practice, but it has helped the environment and other electricity customers, as well.

“Financially wise, it certainly has saved us a lot,” she said. “And of course, we do want to be good stewards of the land. This is a great way to do that.”

Parry had a 274-kW solar panel system installed in 2019 through Paradise Solar, consisting of 832 panels.

The system, albeit costly upfront, has helped pay down the balance on its own merit, she added. Parry said Paradise Solar helped the farm operation find all of the financing options, including loans and grants before installation began.

The family also discussed options with the electric company.

“During the summer months, it was very easy for us to come up with a $6,000 to $7,000 electric bill. Our summer months are still the highest, of course, but now our bill does not go above $600 a month. Sometimes, it’s as low as $17. On really great months, we get a check from the electricity company because we produced more electricity with the solar panels than we use on the farm,” she explained.

Another benefit keeps the Parry’s on the solar panel path, too, she added.

“Environmentally, this definitely helps to offset our carbon footprint. We have organic chickens through Perdue. They love to go out in the pasture areas. . . Since we are organic, we have two audits per year, including the organic audit. The solar panels are always a big conversation piece when they come,” Parry said.

“A fair number of farmers have installed solar panels; many of them have broiler [poultry] farms,” he said. “It does work as a means of conserving energy.”

His family has farms spread throughout the state; several have solar panel systems already installed and working to improve their operations.

“These systems even take care of the electric bill. When it comes to solar, we’re looking at it in a positive sense and seeing what’s going on. Farmers are looking out for our communities. Conservation is just one way we do that.”

Bill Rohrer of Agrolab switched to solar panels several years ago when considering how much electricity his business utilizes.

“I was very frustrated with the grid system, not only the cost but the demand of electricity from my own business,” he said. “When you’re spending $2,000-3,000 a month, you scratch your head and wonder, wow, can we do something differently?”

For Rohrer and Agrolab, solar was the change they needed.

“We paid for the system within three to five years, which shows you how much electricity we use on the Agrolab property. The conservation topic is definitely what gets people interested in solar panels. But conservation and financials are interrelated. Farmers and people in the agricultural industry want to do everything we can to improve the environment. And from the business side of it, it has to make good financial sense for the most part to jump into a project like solar panels. For many of us, it’s a great way to combine goals.”

Continuing, he added, “The way ag is advancing in technology, you have to make sound decisions. In my 30-year career in ag, I have noticed that farmers are making better and better decisions and are getting educated. I have always been a strong advocate of what farmers are doing. They are modest. And I have always said, ‘If you can make a living farming on the Delmarva Peninsula, you can make a living doing it anywhere.’ These farmers are giving it their all for their families, business, community, and the environment. I’m proud to be a part of the ag community and be around farmers.”