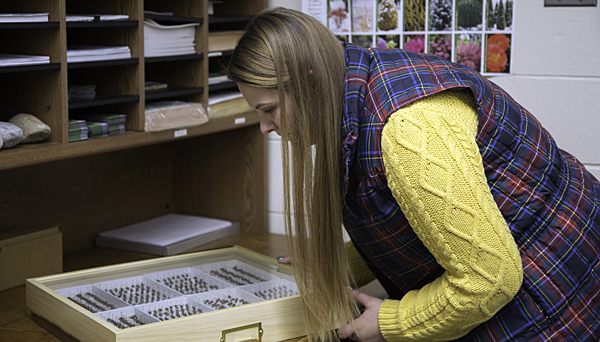 In her position, Meghan McConnell will be inspecting bee colonies, conducting surveys for the presence of honey bee parasites and is responsible for securing samples of suspect colonies to determine suitable measures to control and/or eradicate disease. (Delaware Department of Agriculture)

DOVER, Del. — The Delaware Department of Agriculture announced that they have hired a new State Apiarist, Meghan McConnell, a native of Millville, N.J. In her position, McConnell will be inspecting bee colonies, conducting surveys for the presence of honey bee parasites and is responsible for securing samples of suspect colonies to determine suitable measures to control and/or eradicate disease. The State Apiarist supervises the colony registration program and certifies honey bee colonies that enter or exit the state.

McConnell is a 2012 graduate of the University of Maryland with a bachelor’s degree in Environmental Science & Technology. McConnell is currently finishing her Master of Science in Entomology at the University of Maryland under Dr. Dennis van Engelsdorp. Her research targets the parasitic mite Varroa in honey bees, specifically non-chemical controls and horizontal transfer. In 2016, Meghan was recognized by the American Beekeeping Federation as a Foundation for the Preservation of Honey Bees scholar.

Prior to returning to school for her graduate degree, McConnell interned with the USDA, Natural Resources Conservation Service, for 10 months working with invasive plant species, submerged aquatic vegetation and pollinators. She also worked for a short time at the University of Maryland, Institute of Applied Agriculture as an Undergraduate Technology Apprentice.

In 2012, McConnell joined the Bee Informed Partnership at the University of Maryland. She was part of the Real Time Disease Load Monitoring project that surveyed colonies for bee health, Nosema and Varroa levels in backyard, sideline, and commercial beekeeper apiaries. With the Bee Informed Partnership, McConnell gained practical beekeeping experience while working with colonies in all types of operations, including the UMD apiaries.

Following the completion of her graduate program, McConnell will begin full time as Delaware’s State Apiarist in June 2017.