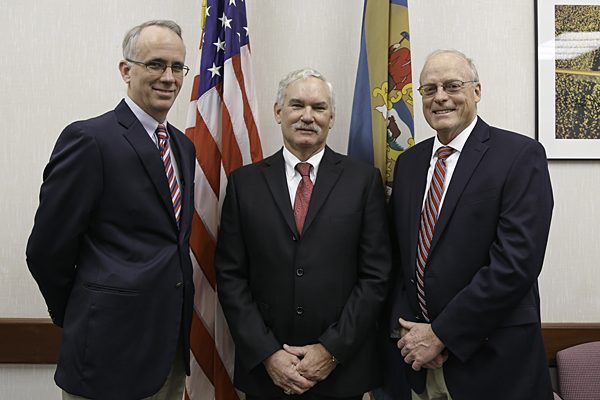 DOVER, Del. — After his confirmation as Delaware Secretary of Agriculture by the State Senate, Secretary Michael T. Scuse announced the appointment of Austin Short and Kenny Bounds as deputy secretaries of agriculture.

Short, who has served as deputy secretary since 2010, is a former state forester and also served as acting secretary of agriculture. Bounds, who retired as senior vice-president for MidAtlantic Farm Credit, is a longtime advocate for Delaware’s family farmers.

“Austin and Kenny are true professionals who will help support our farmers and lead Delaware forward, and I’m pleased to have them both on the team,” Scuse said. “Their service and dedication to agriculture is unparalleled, and Delaware will be a better place because of their work.”

Short, who also heads Delaware’s farmland preservation program and planning staff, served as Delaware state forester from 1995 to 2008 and was president of the National Association of State Foresters in 2006-2007. He served as acting secretary of agriculture during the transition from the Minner Administration to the Markell Administration. He holds a B.S. in forestry and an M.S. in forest biometrics from Virginia Tech. He lives on the family farm near Georgetown, which includes a tree farm and small sawmill.

Bounds, who had a nearly 40-year career with the Farm Credit system, served as Delmarva regional manager and director of government affairs. He also served as president of the Delmarva Poultry Industry, Inc., trade group and president of the LEAD Maryland Foundation. He was honored with the Secretary’s Award for Distinguished Service to Delaware Agriculture in 2016. He holds a degree in Agronomy – Soils from the University of Maryland, College Park, is active in the Boy Scouts of America, and lives near Laurel.

Scuse has served as the Acting Deputy Secretary of the U.S. Department of Agriculture since March 2016, helping support the national agricultural industry, promote vibrant rural communities, and open new markets for America’s farmers. Previously, Scuse was nominated by President Barack Obama and confirmed by the U.S. Senate as Under Secretary for Farm and Foreign Agricultural Services, leading efforts to promote American agricultural products globally. From 2001 to 2008, he served Secretary of the Delaware Department of Agriculture under then-Governor Ruth Ann Minner.