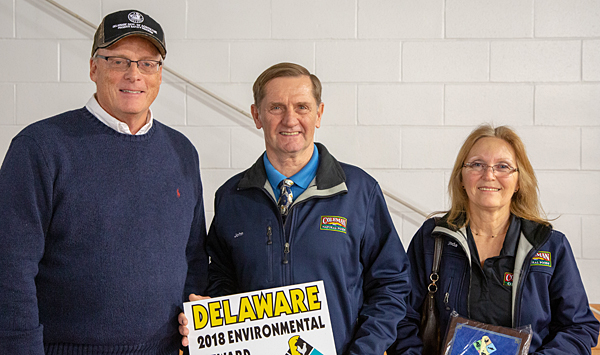 The Brown’s L&J Farm is located in Harrington, where they raise chickens for Perdue Farm’s Coleman Organic division. Certified organic, the poultry houses have an attached area where the birds can spend the daylight hours and the houses are equipped with windows to let in natural light. Being environmentally friendly, the Browns harness solar energy to power the farm and utilize an electric car; woods provide a barrier against noise and odors; runoff is treated by a series of storm-water ponds; and all the houses and the manure shed have concrete pads, which are kept very clean. L&J Farm is a perfect example of a beautiful, neighbor-friendly farm.

“Each of the companies nominates a Delaware poultry grower that excels in preserving and enhancing environmental quality on their farms,” Brosch said. “These farmers practice excellent manure management, proper composting of mortalities and accurate record keeping. They also use enhanced conservation practices on the farm as a whole.”