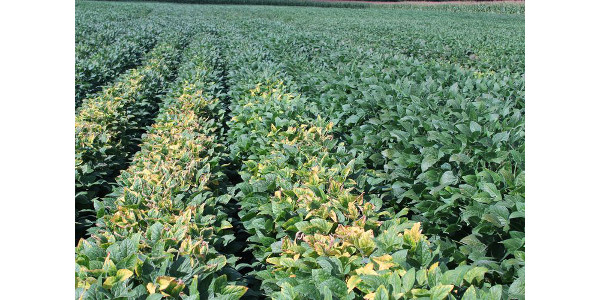 American soybean growers will now have a tough new EPA-registered seed treatment option for guarding crops from sudden death syndrome (SDS) and improving their yields. It will be made available in the U.S. for the first time through Direct Enterprises, Inc. (DEI), the Indiana-based seed treatment experts. (Phil Kaatz, MSU Extension)

WESTFIELD, Ind. (AgPR) —  American soybean growers will now have a tough new EPA-registered seed treatment option for guarding crops from sudden death syndrome (SDS) and improving their yields. It will be made available in the U.S. for the first time through Direct Enterprises, Inc. (DEI), the Indiana-based seed treatment experts.

“We’re pleased to be the first to bring CeraMax® to American farmers,” says Bill Haubner, DEI co-founder and president, in announcing the new product’s availability. “CeraMax is the tool today’s soybean producers need in the war against Fusarium, the fungal disease causing SDS.”

Containing the active ingredient Natamycin, CeraMax empowers the genetic potential of soybean seeds to increase early-season vigor for a stronger, more uniform emergence and maximum yield potential according to research findings. Haubner says DEI sought to bring the product to the US after seeing yield trials.

“Across research trials in 10 states, where CeraMax was added to Acceleron Standard seed treatments, beans showed significantly lower SDS disease incidence and an average yield increase of 4.3 bushel per acre,” explains Haubner. More than 50 field trials were accomplished and compared with an Acceleron-only control treatment. CeraMax also bested hard chemical alternatives ILEVO® and Saltro® in plant vigor tests with no signs of phytotoxic stress on the beans.

The company expects to place 20,000 units of the new CeraMax biological in a variety of growing conditions throughout soybean producing areas hardest hit by SDS in years just past.

“We’ve seen the heartache SDS has brought US soybean farmers and this is an effective, yield-enhancing alternative that is much better from an environmental stewardship standpoint,” says Dennis Tauchen, DEI co-founder and COO. CeraMax was discovered and is produced by Ceradis, a spin-off of Wageningen University & Research in The Netherlands. After looking into Ceradis, developers of CeraMax, Tauchen and Haudner felt this was a logical offering for DEI.

“Farmers in the USA are under pressure by regulators and consumers to move to biological products, but they also wish to keep their yield in doing so,” says Willem-Jan Meulemeesters, CEO of Ceradis. “Now, with CeraMax, farmers can achieve both.”

Meulemeesters says CeraMax is another example of Ceradis’ green innovations – technology to help reduce chemical pesticides. “We are fully committed to making CeraMax a success in the US with our partners at DEI.”

Direct Enterprises, Inc. (DEI) is a fast-growing leader in providing custom-blended seed treatments and seed treatment equipment to the agricultural industry, all delivered in a personal, timely, courteous and professional manner in partnership with customers, vendors and the community. Headquartered in Westfield, Indiana, the company serves customers all across the U.S. with key products and services.

Ceradis B.V. develops and commercializes innovative, environmentally friendly crop protection products and formulations. A spin-off from Wageningen University & Research (Netherlands), Ceradis has developed and patented biological formulation technologies that boost the efficacy of existing chemical active ingredients, resulting in a reduced rate of chemicals use per hectare of farmland and lower residues on the crop. Ceradis also develops and patents biofungicides based on natural products.