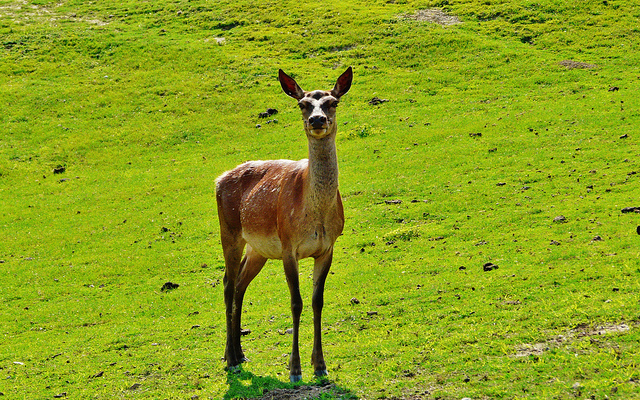 With big game seasons opening in many Western states, the S. C. Department of Natural Resources (SCDNR) would like to remind hunters traveling out-of-state not to import into South Carolina certain carcass parts from deer and elk harvested in areas where confirmed cases of chronic wasting disease (CWD) have occurred. (photo by Daniela Gozzi, creative commons/flickr.com)

CWD belongs to the family of transmissible spongiform encephalopathies and is similar to mad cow disease. CWD attacks the central nervous system of deer or elk and presents symptoms that include extreme weight loss, excessive salivation, odd behavior and poor coordination. The disease is infectious, communicable and always fatal. A large stumbling block for wildlife professionals attempting to understand how the disease is transmitted is that CWD has a prolonged incubation period of up to two years, and no approved test exists to detect the disease in live animals; diagnosis requires examination of the brain. Although wildlife health officials are conducting considerable research, the overall biological and epidemiological understanding of CWD remains poor.

Therefore, in order to ensure that South Carolina’s extremely valuable white-tailed deer resource remains protected, the SCDNR continues to maintain regulations restricting the importation of certain carcass parts from deer and elk harvested in the U.S. states and Canadian provinces where CWD has been documented. Deer hunting generates more than $200 million annually for South Carolina’s economy, and white-tailed deer are the most-sought game species in the state, in addition to being the official state game animal. It is critical that sportsmen and women who pursue big-game in other parts of the country understand and comply with these restrictions to protect the South Carolina deer population.

However, it is also important to note that these regulations do not prevent hunters from bringing home harvested game meat, since most game taken outside of South Carolina is processed in the state where it was harvested. To comply with state regulations, hunters traveling to states with confirmed cases of chronic wasting disease may only bring the following carcass parts into South Carolina:

Hunters may NOT import whole carcasses or parts of deer or elk that contain nervous system tissue such as the brain or spinal column. Hunters traveling out-of-state should also check with the wildlife agency in their destination state to determine its CWD status and follow any restrictions that state may have on the movement of carcasses.

Good evidence exists that the CWD agent can remain viable in the environment, in the soil for example, for long periods of time. This has been demonstrated at research facilities where the disease was present in deer or elk. The diseased animals were removed, the facilities underwent complete disinfecting, and no animals were present for an extended period of time. Once animals were returned to the facility, they became infected with CWD. This is precisely the reason that the SCDNR is asking hunters not to bring certain parts of carcasses to South Carolina when they hunt in states where CWD has been diagnosed. If hunters dispose of these carcass parts in South Carolina, the disease agent could potentially infect deer in that local area.

The SCDNR is joining many other states in letting hunters know how they can help fight the spread of CWD. The disease represents a very significant threat to North America’s deer and elk populations, and it may be the most notable wildlife disease situation the country has ever faced. The SCDNR has conducted surveillance for CWD in South Carolina since 1998. To date, the disease has not been documented in South Carolina or any Southeastern state in the vicinity of South Carolina. Surveillance since 2002 has included samples from all 46 South Carolina counties, and over 6,000 total deer have been tested.

Fortunately, South Carolina’s white-tailed deer population currently has limited risk from CWD, due in part to the aggressive steps that the SCDNR and the S.C. General Assembly took years ago to limit and strictly regulate the importation of live deer, elk and other cervids. There is evidence that movements of live cervids for commercial purposes may have impacted the current CWD situation in other states, as many cases have been linked to captive animals. This is an important point, because states vary with respect to allowing cervids to be transported for commercial purposes. The SCDNR has been criticized in the past for not being more liberal in supporting or allowing deer farming or high fenced “shooter buck” operations that depend on moving animals into the state. However, since CWD has become a concern, a growing list of states have discontinued allowing deer to be imported for any purpose.