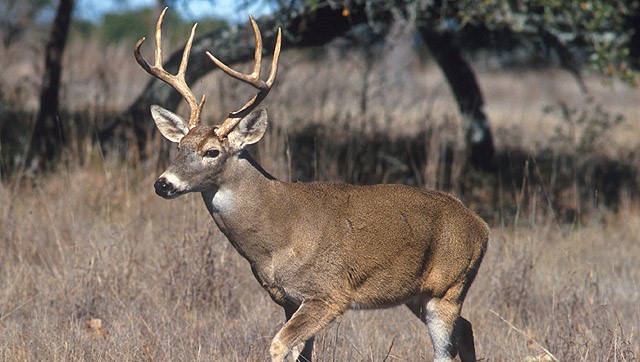 White-tailed deer could serve as a host for the rift valley fever virus if the virus ever entered the United States, according to an Agricultural Research Service and Kansas State University study. (Photo by Scott Bauer)

WASHINGTON — Rift Valley Fever (RVF), an infectious viral disease, poses a significant threat to livestock and human health in Africa and the Middle East. Although the disease has not reached the United States, a recent study by the Agricultural Research Service (ARS) and Kansas State University (KSU) shows that U.S. white-tailed deer are highly susceptible to the RVF virus (RVFV).

The disease causes significant economic losses due to death and abortion among infected livestock. Cattle, sheep, goats and camels are particularly susceptible to the virus. It can also infect humans through contact with organs, blood or milk of infected animals or from the bites of infected mosquitoes and blood-feeding flies.

In the past 15 years alone, RVFV has caused tens of thousands of human cases, hundreds of human deaths and more than 100,000 domestic animal deaths in affected countries, according to an ARS report published in the Annual Review of Entomology.

Before the findings were published in Emerging Infectious Diseases in September 2018, it was thought that the United States was not at risk for RVFV because of a lack of susceptible wildlife, said microbiologist William Wilson, with the ARS Arthropod-borne Disease Research Unit in Manhattan, Kansas.

The 2006-07 Kenya RVFV outbreak spurred ARS researchers to establish an RVFV research program. Since then, Wilson and his team have conducted extensive research on RVFV from developing diagnostic tests to a patented vaccine.

Research conducted by Wilson and collaborator Juergen Richt at KSU’s Center of Excellence for Emerging and Zoonotic Diseases demonstrates that white-tailed deer are an ideal host for the virus. In experiments conducted in KSU’s containment facilities, deer infected with the wild-type Kenya virus strain developed the disease and were able to transmit it to uninfected deer, according to the scientists.

This is the first study of RVFV infection in white-tailed deer, according to Wilson. The research clearly suggests that white-tailed deer could play a significant role in establishing, maintaining and transmitting the virus if RVFV was ever introduced into North America, he added.

One reason these preliminary findings pose a serious concern is the large U.S. white-tailed deer population that could spread the disease if infected, Wilson said. Deer could serve as a disease reservoir, where the infectious virus lives and reproduces, and become a host—spreading the virus to other animals through direct contact or fecal material. Wilson and his colleagues continue to analyze and examine the effects of RVFV in white-tailed deer.

What are riparian buffer strips?