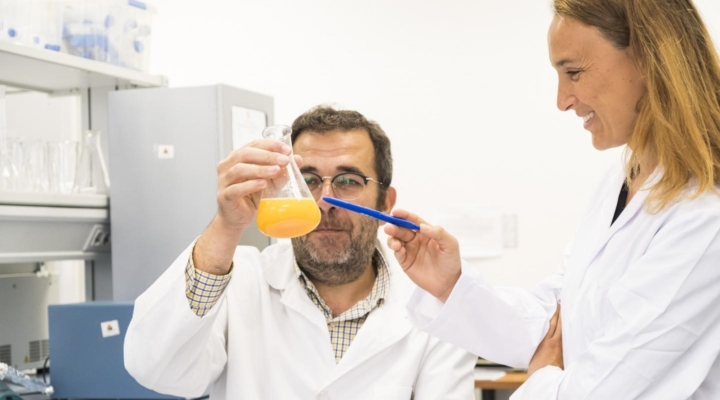 SEVILLE, Spain — Researchers from the Laboratory of Food Colour and Quality at the University of Seville have published a study in which it is shown how certain types of cold treatment that are used by the citrus fruits industry in the preparation of juices have a great impact on the colour of orange juice and on the concentration and bioaccessibility of the carotenoids present in the juice.

The bioaccessibility of a compound is the quantity of that compound that is freed from the food and is capable of being absorbed by the intestinal wall so that it arrives in the blood and is accumulated in the different organs/tissues where they can affect their potential health benefits.

The cold treatments have two opposite effects. On one hand, they cause the carotenoids to degrade (negative effect) and, on the other hand, they generate an increase in the bioaccessibility of the carotenoids (positive effect). Taking these two effects into account, it can be concluded that deep-frozen juices that are defrosted to room temperature or in a microwave are potentially better at increasing the level of carotenoids in the body.

During this project, testing was done on fresh orange juice, on deep-frozen juice that had been defrosted to room temperature, either in a microwave or in the fridge, and on pasteurised juices. The analysis focused on two carotenoids in particular, phytoene and phytofluene, which are both colourless. “These compounds are increasingly acquiring importance among the scientific community as there are ever more studies that indicate their various benefits for health and cosmetics”, explains the University of Seville teacher Paula Mapelli.

Although all the cold treatments analysed generated carotenoid loss, the deep-frozen juices that were defrosted to room temperature or in a microwave were better sources of bioaccessible carotenoids than fresh juice. “That is to say, despite the fact that the concentration of carotenoids in the deep-frozen juices was less than in the fresh juice, the reduction in the size of the particles and the destruction of the cellular material that these treatment produce mean that the amount of carotenoids that can be absorbed by the intestine is higher”, the researcher adds.

According to the results, among the treatments analysed, pasteurisation is the treatment that produces the highest level of carotenoid degradation and the greatest change in the colour of the juice.

To the question as to in which conditions the natural properties of the juice are best preserves, the experts respond that “fresh juice is the juice that has the highest concentration of carotenoids, but this does not mean that it is the one that raises the carotenoid level in the blood and tissue the most, as you have to take into account the amount of carotenoids that are actually absorbed”.

“Consumers tend to think that treated juices are “less healthy” than fresh juices. However, in this study, it has been shown how, at least in relation to the content of carotenoids that reaches the blood and tissue to protect us from disease, this is not always correct”, comments the University of Seville Faculty of Pharmacy teacher Antonio J. Meléndez.

Pinalate Orange and the CITIUS laboratories

This research was carried out using the Pinalate variety of orange. This variety is a spontaneous mutation of the Navelate sweet orange. It is totally “natural”, not transgenic. The most important characteristic of this variety is that it has a high concentration of the colourless carotenoids phytoene and phytofluene.

To carry out the project, use was made of the services of Microscopy, Functional Characterization and Biology situated on the Centres of Research, Technology and Innovation at the University of Seville (CITIUS). In addition, it benefitted from the collaboration of the doctors María Jesús Rodrigo and Lorenzo Zacarías of the Department of Food Biotechnology, Institute of Agricultural Chemistry and Food Technology (IATA-CSIC) in Valencia. The study was possible thanks to funding from the Council of Innovation, Science and Business (Consejería de Innovación, Ciencia y Empresas) of The Andalusian Regional Government (project CAROTINCO-P12-AGR-1287) and from the Ministry of Economy and Competiveness (network of excellence BIO2015-71703-REDT).

“Our next step, which will complete this research, will be to determine the content of colourless carotenoids in the blood after consuming these and other orange juices. That is to say, an in vivo study that corroborates this and other previous in vitro studies with other orange juices”, states the researcher Carla María Stinco, also author of the study.

–University of Seville
via EurekAlert!

Enter your melon on June 22nd!