Home / South Carolina / Decreased peach production
A new user experience is coming! We'll be asking you to login to your Morning Ag Clips account March 1st to access these new features.
We can't wait to share them with you! Read more here. 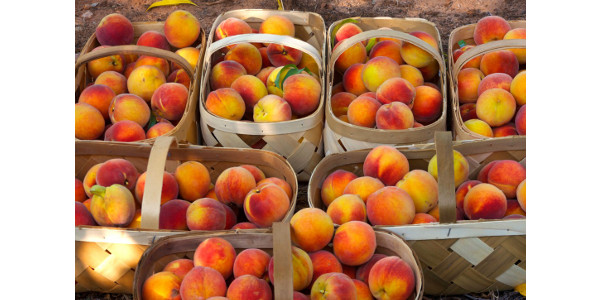 CLEMSON, S.C. — For most, peaches are a staple of summer. During the year’s warmest months, restaurant and at-home chefs get their fix by making everything from peach pies to salsas and chutneys. There is no limit to what they can create, unless there are no peaches to be found. And in 2017, that may be an unfortunate reality for many.

An unseasonably warm winter coupled with a late freeze in March has dramatically impacted peach production in South Carolina, resulting in reduced yields across the state.

“The later the freeze, the more damage it does,” said Juan Carlos Melgar, an assistant professor of pomology at Clemson who was recently quoted in The New York Times’ coverage about the shortage. “We believe the one in mid-March killed an estimated 80 to 90 percent of the state’s peach blossoms.”

Late-season freezes aren’t necessarily uncommon, but this year’s was drastic. According to Southeast FarmPress, “this marks the worst South Carolina peach crop in 10 years, since the Easter freeze of 2007 destroyed 90 percent of the crop with close to $1 billion in crop damage across the region.”

In 2016, farms also faced a freeze but only lost an estimated 10 percent of flowers. Why did the numbers increase so drastically this year? During the winter months of 2015-16, cool temperatures provided peach trees with the number of dormant hours required to produce a thriving crop, helping prevent early buds and lowering the risk of loss due to a late freeze. This winter was much warmer, producing early buds more susceptible to damage with last-minute frosts.

“Think of it as a biological clock, peach trees need cold during winter months for dormancy and we know how many hours each variety needs based on a mathematical model,” Melgar stated.

On average, peach trees in South Carolina need 650 to 1,050 dormancy hours between 45 to 32 degrees. The amount of time required depends on the peach variety, which can be summarized in two categories: low chillers and high chillers. This year, farms in the Ridge, the main peach producing area in South Carolina, experienced around 600 hours. This provided low chillers with barely enough dormant hours resulting in early blooms that were killed by the late frost. High chillers tend to bloom later so while they didn’t experience the same amount of damage from the frost, they simply didn’t receive the required number of dormancy hours, causing below average production.

While 32 degrees Fahrenheit is considered freezing, 25 degrees is typically the cutoff point where anything in full bloom or post-bloom is killed. This year, farms in the Ridge — between Columbia, South Carolina, and Augusta, Georgia — saw temperatures in the teens. On the other hand, some farms in the Upstate, where blooming occurs about 10 days later than in the Ridge, had relatively less damage. Some areas do not have any crop but there were a few farms that weren’t impacted simply because of their location.

“Depending on where the farm is, their slope and whether it’s south-facing or not impacts how much heat they receive,” Melgar continued. “Location is everything and can be very valuable.”

Will the available peaches still have that great taste we’ve all come to know and love?

“Something we normally see when there is a lack of chilling is that peaches appear more green and feel firmer than consumers are typically accustomed to,” Melgar said. “Typically, there is also a more pronounced tip, which ultimately affects shipping. There are ways to protect peaches from bumping into each other to avoid bruising, but that can impact bottom line for shipping costs.”

Peach growers will not be the only ones facing the economic impact of this spring’s frost. Farms often hire many additional hands to help prune, thin and harvest the crop, but fewer peaches means less work resulting in most farms canceling contracts and letting workers go.

So consumers looking for local peaches this summer should try local vendors rather than national retailers since many farms will sell this year’s peaches in baskets versus working with distribution centers. Mother Nature’s freeze didn’t provide South Carolina with copious peach crops, but freezing peaches at home can help people enjoy them year-round.