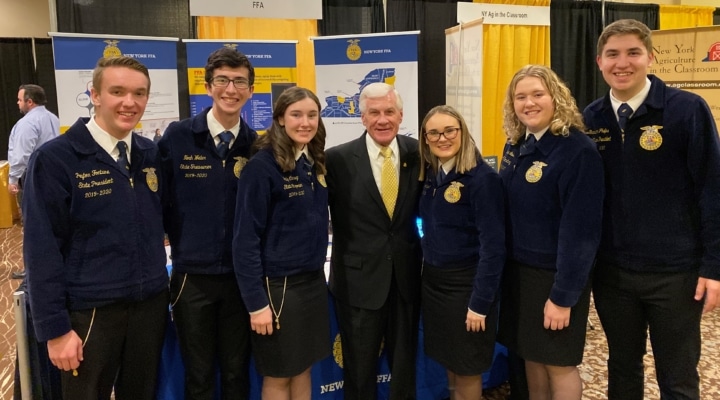 ITHACA, N.Y. — As New York FFA says goodbye to 2019, we have much to look back and reflect upon. 2019 was a very successful, meaningful, and joyful year for our FFA chapters and members.

We are very excited to have grown our membership to over 7,000 students and have chartered twelve new chapters across the state, making us the state with the largest percentage growth for 2019 in the nation. We have recognized our finest supporters and students at both the State Convention in May and the National FFA Convention in October. Thousands of members have competed in Career and Leadership Development Events, Proficiency Award Applications, grants, scholarships and they look forward to competing again in the future. FFA members have been active members in their community through service projects, volunteering, advocacy, and education. Our members continually grew and became incredible leaders in 2019.

In the month of December, New York State FFA did not take a pause from the bustle of the season as events happened all over the state. From interacting with supporters to chapter visits, New York FFA has stayed busy.

The New York Farm Bureau is a huge supporter of the FFA. They have offered scholarships for our members to apply for and have given students the opportunity to interact with many people in the agricultural industry. This December, the state officer team was invited to attend the New York Farm Bureau Annual Meeting. While there, the state officers were able to participate in the opening ceremonies, meet with many FFA supporters, and be recognized by the Commissioner of Agriculture, Richard Ball. Past New York State FFA officer and past National FFA President (1966-1967) Gary Swan was also at the annual meeting. He is the only National Officer from New York to serve as the National FFA President.

FFA members look forward to a busy and successful 2020 as we ring in the New Year with conferences, competitions, and much more.

District VII FFA chapters have had an exciting few months. On October 9th, members from the Moravia FFA Chapter, Cayuga Onondaga BOCES FFA Chapter, and the Southern Cayuga FFA Chapter attended a Cayuga County Farm Bureau Meeting. Students spoke to local farmers, business owners, and politicians. Representative John Katko discussed the importance of the future of agriculture and gave a shout out to the FFA members present. It was exciting and empowering to see agriculture advocacy in action.

Another highly anticipated event for the district was attending the 92nd annual National FFA Convention in October. Many chapters from District VII gained new experiences that will shape their futures. The Tully FFA chapter proudly represented New York State FFA as a 3-Star Chapter through the National Chapter Award Program. Along with this recognition, the Tully FFA members had the opportunity to create the New York Hall of States booth. Through this experience, the members were able to meet people from around the nation while informing others about the great state of New York. Sydney Grosso, of Tully, represented the state in the Employment Skills Leadership Development Event. Ben Reed, a Tully FFA member, received the American Degree. This is the highest recognition the FFA bestows upon its members. The Southern Cayuga FFA Chapter represented New York in the Agricultural Issues Forum Leadership Development Event, with the topic of manure runoff and water quality in the Finger Lakes. District VII FFA chapters are proud of all the members representing New York State FFA at the National FFA Convention and look forward to the upcoming competition season in 2020.

Angela Touchette, the Tully FFA President, is grateful for the opportunities FFA has brought to her. As a school greenhouse manager, she is given a lot of responsibility. Angela enjoys this challenge and loves working with new members. She plays a large role in the chapter’s plant and wreath sale. Serving as an officer this year, she has learned the importance of teamwork, what it takes to make the chapter run smoothly, and how to handle the stress that comes with responsibility. Angela was one of the many members who attended National Convention this year and believes that the best part of the experience was growing closer with her teammates. The opportunity to get to know her teammates more even made the long bus ride one of her favorite parts of the trip. Angela is a senior and plans to attend college to further explore environmental horticulture in hopes of becoming a professor. Angela is setting a great example for her chapter and the rest of District VII.