Home / Michigan / December is National Eggnog Month: Part 1
A new user experience is coming! We'll be asking you to login to your Morning Ag Clips account March 1st to access these new features.
We can't wait to share them with you! Read more here. 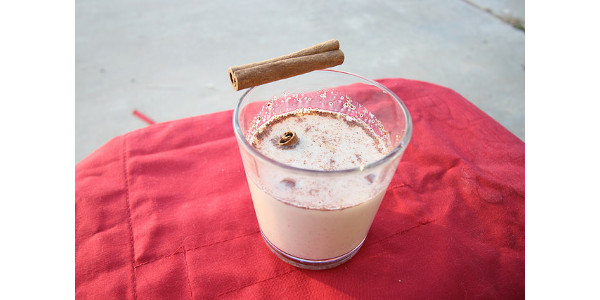 Eggnog, otherwise known as milk punch, is a creamy, frothy holiday treat that can be homemade with all Michigan ingredients. (Wheeler Cowperthwaite via Flickr)

EAST LANSING, Mich. — The holiday season is upon us! This is a time to celebrate with family, friends, and food. And nothing says celebrate like eggnog!  Eggnog, otherwise known as milk punch, is a creamy, frothy holiday treat that can be homemade with all Michigan ingredients! It is generally made with milk, sugar, cream, and whipped egg whites. Spirits can be added if desired, but aren’t necessary.

The History and Etymology of Eggnog

Historians’ best guess as to the origin of eggnog dates back to the English Middle Ages, where a warm, milky ale called ‘posset’, was consumed.  Posset was often consumed with eggs and figs; eggs, figs, dairy, and sherry were products that only the wealthy could afford to enjoy at the time. Eggnog was thought to have arrived in the U.S. prior to the revolutionary war. Whereas most of the eggnog consumed in Britain was by the upper class (with sherry), as eggnog advanced throughout the U.S. like a milky river of frothy delight, it was generally consumed with rum or bourbon. Because the agricultural-based colonies were flush with chickens and cows, the consumption of eggnog was not limited to crusty upper class Brits, but rather a drink that most people throughout the American colonies could enjoy.  In fact, food historian, Emelyn Rude (2015), author of “How Eggnog (Almost) Changed the World”, explains that consumption of eggnog was a popular holiday pastime of many, even including West Point cadets, such as Edgar Allen Poe and Jefferson Davis.

The etymology of the term “eggnog” is somewhat of a mystery. Merriam-Webster suggests that one of the first uses of the term was around 1775. “Nog” is similar enough to the word “grog”, rum mixed with water, often consumed by British sailors in the early 1700s. “Noggin” was also synonymous with “a small cup” as well. We will likely never know.

Ironically, during this season of kindness and joy, not unlike fruitcake, eggnog breeds inharmonious discord amongst many people.

If you do choose to consume eggnog during the holiday season, please do so safely and avoid competitive eggnog chugging. In 2014, a Utah man who won a holiday eggnog chugging contest (one quart in 12 seconds), received a $50 gift certificate for his efforts, but later ended up in the Intensive Care Unit with pneumonia. He later learned that some of the eggnog may have gone “down the wrong pipe” as it were. Amazing.

If you enjoyed this article as much as you enjoy eggnog, please read Eggnog Part II for many tasty holiday recipes that are sure to please. You can always find interesting articles like this by visiting Michigan State University Extension.

Issues with how RFID tags are documented